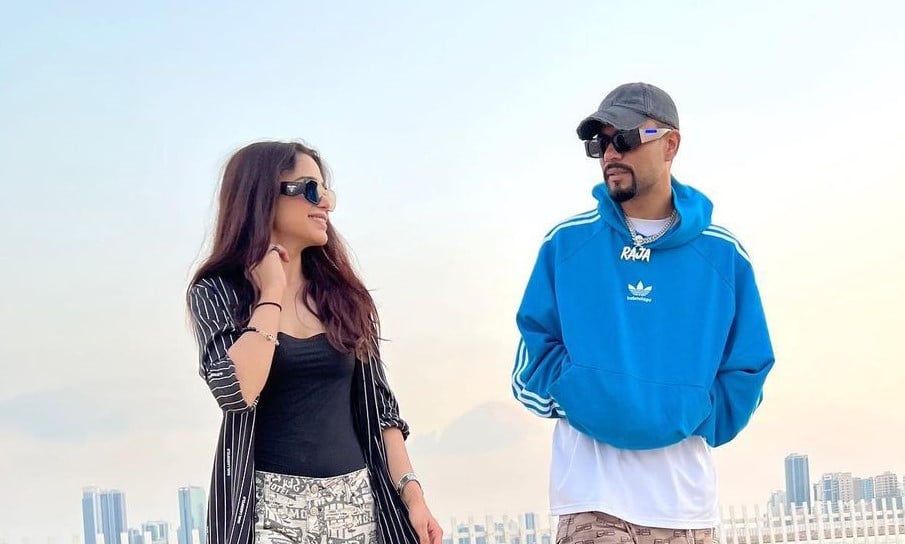 Description: Are Aima Baig and Bohemia collaborating on a new song? Well, their new Instagram posts suggest so! Recently, the two singers shared photos of them together in Bahrain on the aforementioned micro-blogging website, which instantly went viral online. In the pictures, Baig and Bohemain are strolling while engrossed in a conversation with each other. The duo also captioned their posts with praises. Baig referred to the Pakistani-American rapper as a "Genius," and Bohemian called the Hone Do singer a "superstar."          View this post on Instagram                       A post shared by Aima Baig (@aima_baig_official)         View this post on Instagram                       A post shared by BOHEMIA (@iambohemia) Although the rumours of collaboration haven't been confirmed by either party, majority of their followers seem to think that is the case. Prior to this, Baig also uploaded a series of photos clad in a cheetah print jacket, with an important message for her fans. She highlighted how this year will be all about music. "This year will be all about Music, one that sticks with you no matter what," quipped Baig.         View this post on Instagram                       A post shared by Aima Baig (@aima_baig_official) Roger David, popularly known by his stage name Bohemia is a Pakistani-American rapper, songwriter and record producer. He is known for his fiery Punjabi rap music and has won several awards that prove his talent. Bohemia also appeared in Coke Studio and performed numerous songs in 2012 and 2020. Some of his hit music includes Kali Denali, School Di Kitaab, and Kandyaari Dhol Geet. On the other hand, Baig has also made noteworthy contributions to the music industry with songs such as Baazi, Befikriyan, Item Number, Chan Way, Sajna Door, Be Adab Be Mulahiza and many more. Have something to add to the story? Share it in the comments below.
Published Date: 24-Nov-2022
Share:  Linkedin   Whatsapp   Facebook