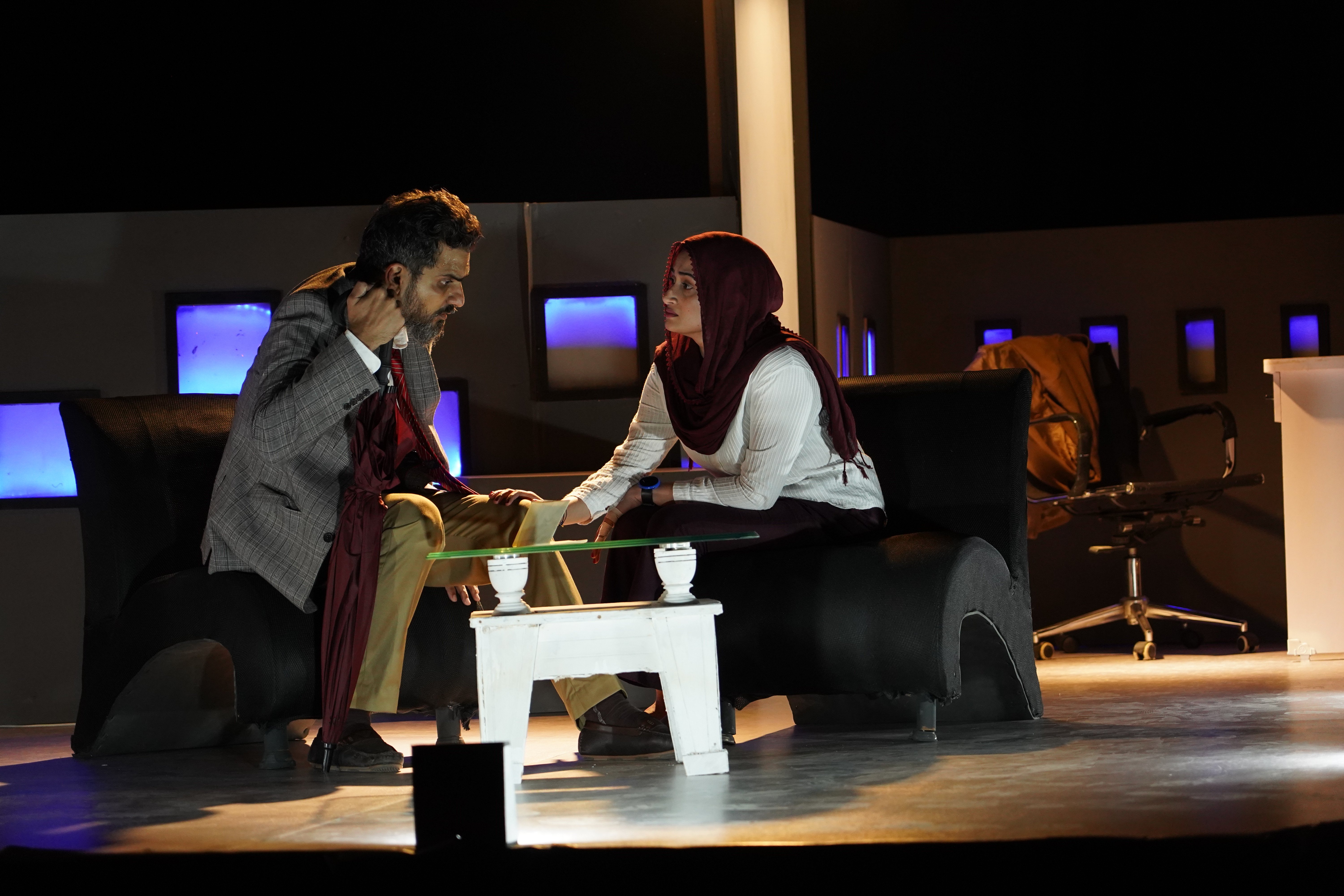 Description: It is truly mind-blowing to see how Reader conceits the truth by simply changing perspectives. “We were all very hesitant about giving the nod to this play but when Sunil’s [Shanker] name came up, we gave it a green light for only he could’ve brought this masterpiece to life,” said actor and dancer, Bazelah Mustafa in a conversation with The Express Tribune. Also starring theatre bigwigs Fawad Khan, Osama Tahir, Hassan Raza, Bazelah, Kulsoom Aftab, and Naveed Kamal, Napa’s latest production, Reader, is an adaptation of Ariel Dorfman’s play of the same name. Like all stories, this one opens with an introduction of Fawad’s Daniyal Siddiqui/Danish Hussain as a successful publisher who loves his son immensely and is having a not-so-secret affair with his secretary after his wife’s death. As you zoom into his life, you realise how it is essentially a morbid enclosure of sins, lies, and corruption — how fragile, distressed and enslaved he is by his own past, by some decisions he took to climb a ladder of success that ends up roping him into the same cycle. The fast-paced psychological thriller is a play within a play and it begins with Danish, a censor, picking up a novel, titled  Khof (fear), which turns out to be based on his life, revealing all that he has buried within to protect his son and himself. The stage shifts from present-day Daniyal trickling with fear upon reading the screenplay, to Danish materialising what is in the novel essentially for the audiences. One would think the constant back and forth between what’s real and what’s scripted would be confusing but the set design, exceptional performances, and the tiny details of the wardrobe and body language keep you hooked as if you are in a time capsule that malfunctioned. Danish/Daniyal lives with only one fear; no one should find out what he did to his wife Tanya/Sonya (Kulsoom) — not his son Ibrahim/Zain (Hassan) and not his mistress Janaan/Ayeza (Bazelah). But alas, he is not the one telling his story and there is someone who knows it all, someone who made it all happen — someone behind his regrets. Is it his curious son? Is it his secretory that he uses to fill the deep voids of his heart? Is it the disciplined maniac of a director (Osama) who believes in censoring just enough for the niche to feel they’re liberal and the masses the opposite? Or is it just another fictional tale written by a genius Riaz Jalib that just happens to be echoing something real? Danish/Daniyal’s constant fury and agony coupled with his son’s desire to know the truth about his mother unravels a mystery that eventually leads to a fourth-wall-breaking climax. The overlapping timelines submerge, and all the characters come back to the present after facing the hard truths, to face the consequences of knowing too much. Seeing how Reader conceits the truth by changing perspectives is truly mind-blowing. It correlates prison cells and asylums to re-education centres, publishing checks to censorship of ideas and the protection of the forest to policing human thought. Although a limited stage presence, Kulsoom’s Tanya/Sonya shines on stage, even with all the darkness she holds, and stays within you as a ghost for days after the play. Her annoyingly shrieky cry for help fills you with a sense of loss, torture, pain and helplessness — so powerful that it makes you numb. Osama is brilliant in his dictator avatar. He not only controls and scares the people within his play but also the audiences with not even one wanting to stand up to him and call him out on his nuisance for no one is ready to face the consequences of keeping him accountable. As good a writer as Fawad is, he is an even better actor. His remorse, hopeless love, lust, wit, terror, and fear — almost all emotions on stage — were palpable. From careful limping to crossing all boundaries for his son, he owns the stage as his space but also is detached from it as per his character’s requirements. One can not talk about the play without praising the magical set that Sunil envisioned and brought to life, courtesy of Ossama Ranjha. With a script so layered, it is not easy to seamlessly shift realities and jump timelines but he brought the stage on wheels to keep the viewers on edge — literally tripping over the life and death in Fawad’s character. Reader makes you question the things you’ve kept hidden, the things you justify to yourself in the name of love, the decisions, although harmful, that you once thought were the only right ones at the moment, the people around you that seem a little lost within their thoughts and most importantly, the people that have a say in your life. Reader is running at the Zia Mohyeddin Theatre at Napa till November 27. Have something to add to the story? Share it in the comments below.
Published Date: 25-Nov-2022
Share:  Linkedin   Whatsapp   Facebook