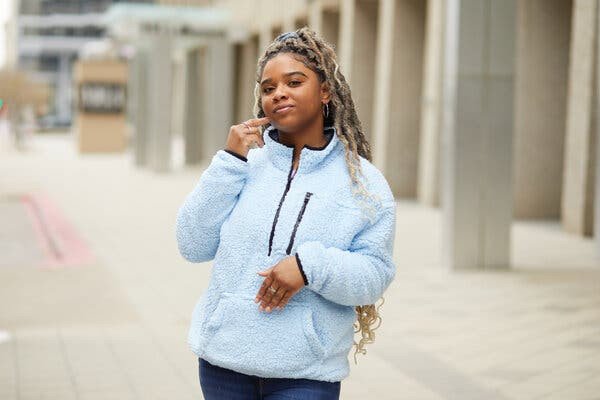 Description: "English is not my first language," writes Nakia Smith on her TikTok account, although the 22-year-old grew up in Texas. The young African American woman has been deaf since birth, and uses her large online following to promote her little-known dialect: Black American Sign Language. In her video clips, she tells her 400,000 followers about the differences between her language and the standard American Sign Language (ASL). Among other things, she signs with two hands rather than one, uses more space and makes more use of facial expressions. Smith tells her followers that to sign "paper" in ASL, a person mimics a sheet of paper by tapping the left hand with the right hand, while moving the latter outwards. In Black American Sign Language, the person waves both thumbs outwards at shoulder level. "Black ASL came from ASL, but has more seasoning. It's more emotionally involved," she told AFP, with her brother acting as interpreter. "Growing up I learned to sign by watching older people in my family. Then when I went to school my friends didn't understand what I was signing. I realized that BASL was unique and wanted to put it out there for people to learn it," she said. Great variety  Those differences were also noted decades ago by Carolyn McCaskill, a professor at Gallaudet University in Washington, one of the largest institutions for the deaf and hard-of-hearing in the world. As a child in Alabama, she first learned sign language at a school for deaf Black children, before going to study at a school for white children once segregation ended. "The signing they used was so different, even though the schools were only 10 minutes away from each other," she said. The earliest schools for the deaf and hard-of-hearing in the United States date from the early 1800s, but in 17 southern states and Washington, separate schools for Black students were established towards the turn of the century. In these 18 establishments, a distinct means of communicating through signs evolved organically from ASL. These schools lasted for some 70 years, until desegregation, which was long enough to allow the emergence of a dialect with its own characteristics. For her book, The Hidden Treasure of Black ASL McCaskill interviewed dozens of deaf African Americans to catalog the specifics of the dialect. Thanks to the geographic remoteness of the communities, American Black Sign Language enjoys a rich variety, and some signs differ from one part of the American South to the next. Some remember a dire lack of resources at their schools, and untrained teachers who did not teach them the full diversity of standard American Sign Language. "We Black students were repetitive, we lacked variety, our sign language was quite limited," recalled Pamela Baldwin, who went to school in Arkansas during and after segregation, in an interview with McCaskill. That lack of resources explains the informality of a dialect that relies on a range of communication elements rather than the sole use of pre-established signs. Emotional vs... robotic  "Black people sign with more rhythm, more style, using words that reveal our emotions, more free-flowing," one former deaf Black student from Texas said during a conversation posted online by McCaskill as part of her research. "We match the flavor. I don't mean to offend white people, but their signs lack affect, it has no tone, it's robotic-like signing that shows no emotion." Today, Black American Sign Language survives primarily by being passed on from generation to generation, as in the case of Smith, who learned it from her grandfather. This makes it almost impossible to estimate how many people actually speak it, said McCaskill. "We have older Black deaf individuals who are passing away due to aging, but it's very vibrant, the younger generation wants to preserve the language," she said. McCaskill launched the nation's first-ever Black deaf studies center in 2020 with colleagues at Gallaudet, which offers a minor in the history and culture of deaf African Americans. She hopes her center will serve as a base for the preservation of the dialect, but recognizes the importance of figures like Nakia Smith and her popularity on social media. "Her videos went viral and reached out to different pockets of the community, which is great," she said. For her part, Smith wants more visibility for sign language, standard or Black, and would like to get involved in the entertainment industry to help bring about change. "I want to see it in popular culture, in books and TV shows, wherever," she told AFP. Have something to add to the story Share it in the comments below.
Published Date: 24-May-2021
Share:  Linkedin   Whatsapp   Facebook