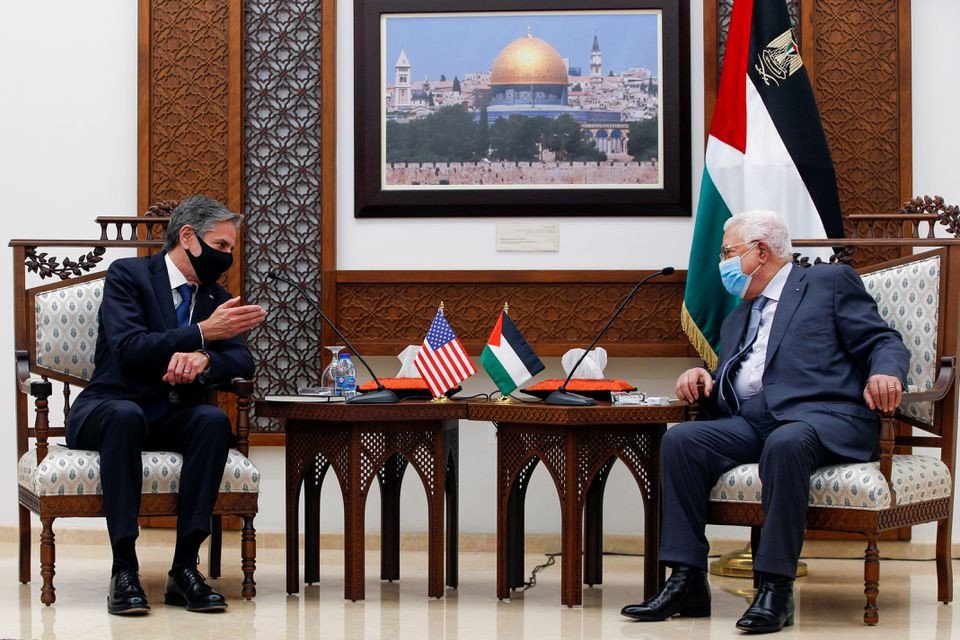 Description: US Secretary of State Antony Blinken pledged on a Middle East mission on Tuesday that Washington would rally support to rebuild Gaza as part of efforts to bolster a ceasefire between its Hamas rulers and Israel. But Blinken made clear that the United States intended to ensure that Hamas, which it regards as a terrorist organisation, did not benefit from the humanitarian aid - a potentially difficult task in an enclave over which it has a strong grip. Blinken began his regional visit in Jerusalem, where he held talks with Prime Minister Benjamin Netanyahu. The Israeli leader, speaking to reporters with the top US diplomat at his side, threatened a "very powerful response" if Hamas renewed cross-border rocket strikes. The truce, brokered by Egypt and coordinated with the United States, began on Friday after 11 days of the worst fighting between Hamas and Israel in years. Now in its fifth day, it has been holding. "We know that to prevent a return to violence we have to use the space created to address a larger set of underlying issues and challenges," Blinken said. "And that begins with tackling the grave humanitarian situation in Gaza and starting to rebuild." The United States, he said, would work to rally international support around that effort and make its own "significant contributions", to be announced later in the day. "We will work with our partners, closely with all to ensure that Hamas does not benefit from the reconstruction assistance," Blinken said about the group. Blinken will be in the region through Thursday, and will also travel to Egypt and Jordan. In tandem with his visit, Israeli authorities allowed fuel, medicine and food earmarked for Gaza's private sector to enter the territory for the first time since the hostilities began on May 10. Blinken, who said he hoped to rebuild relationships with the Palestinian people and the Palestinian Authority, was due to meet Western-backed Palestinian President Mahmoud Abbas in Ramallah in the occupied West Bank later in the day. Negotiations between Israel and the Authority collapsed in 2014, and U.S. President Joe Biden's predecessor Donald Trump cut aid to the Palestinians while promoting a plan that would leave Israel in control of many of the settlements it has built in the West Bank. TWO STATES But while Biden has said a two-state solution was the only answer to resolving the Israel-Palestinian conflict, U.S. officials have suggested it was too early for wider peace talks. Israel is in political flux after four inconclusive elections in two years, and the Palestinians are divided by enmity between Hamas and Abbas, who holds sway in the West Bank. Blinken said he and Netanyahu discussed "other steps" that need to be taken by leaders on both sides to set "a better course" for Israelis and Palestinians. "As President Biden said, we believe that Palestinians and Israelis equally deserve to live safely and securely, to enjoy equal measures of freedom, opportunity and democracy, to be treated with dignity," Blinken said. At least 253 people were killed in Gaza and more than 1,900 wounded, Palestinian health authorities said, during the fighting that saw hundreds of Israeli air strikes. The Israeli military put the death toll in Israel at 13, with hundreds treated for injuries after rocket salvoes caused panic and sent people as far away as Tel Aviv rushing into shelters. Commercial buildings, residential towers and private houses across the Gaza Strip, where 2 million people live, were damaged or destroyed by the time the ceasefire was announced. In Gaza, Palestinian officials estimated reconstruction costs at tens of millions of dollars. Israel has blockaded the territory since 2007, in what Palestinians condemn as collective punishment. Egypt also maintains restrictions on its border with Gaza. Both countries cite security concerns for the measures. Israel says air strikes hit legitimate military targets and that it did its utmost to avoid civilian casualties, including giving prior warnings when it was about to strike residential buildings that it said also had a military use. The hostilities were set off in part by Israeli police raids on the Al-Aqsa mosque compound in Jerusalem and clashes with Palestinians during the Muslim holy month of Ramadan. Violence between Arabs and Jews also erupted in some Israeli cities, and Blinken said he discussed the inter-communal unrest with Netanyahu. "Healing these wounds will take leadership at every level," Blinken said, echoing Biden's condemnation of what the secretary of state called "a shocking eruption of antisemitic attacks" in the United States itself.
Published Date: 25-May-2021
Share:  Linkedin   Whatsapp   Facebook