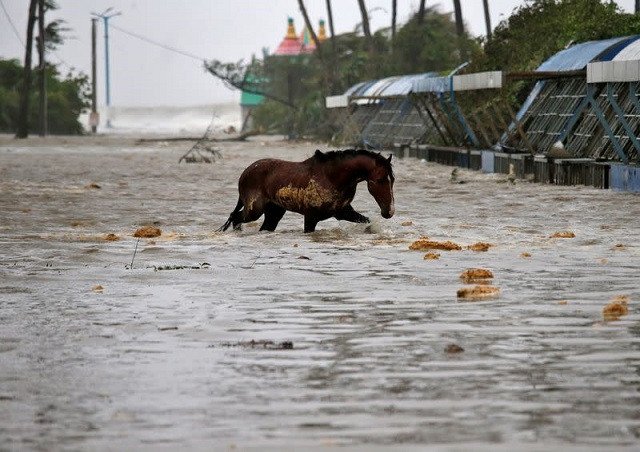 Description: Hundreds of thousands of villagers along the low-lying coast of eastern India and Bangladesh were marooned by floodwaters on Thursday in the aftermath of a powerful cyclone that has killed at least five people, officials in both countries said. Cyclone Yaas ripped through the eastern Indian state of Odisha on Wednesday packing gusts of up to 140 kph (87 mph) and whipping up tidal surges in neighbouring West Bengal state and Bangladesh even though they were not directly in its path. Relief workers delivered food and water to people marooned in 124 villages in Odisha, the state's top bureaucrat Suresh Mahapatra said. At least two people had died in the state. Read: Powerful cyclone Yaas destroys homes in India, forces airport closure The storm, the second to hit India in a week, comes at a time when the country is battling a deadly second wave of coronavirus infections that has stretched the healthcare system to its breaking point. Some 500,000 people were sheltered in relief camps in West Bengal and officials said they had taken steps to reduce the risk of a potential spread of the virus. "Flood shelters have quarantine rooms for those showing symptoms of Covid-19 like fever, sore throat, body ache," Dr Indranil Bargi, a medical officer in Gosaba area, told Reuters. People are being tested for coronavirus using the rapid antigen test and anyone who tests positive would be shifted to safe homes set up in government offices and schools, he said. Authorities in Bangladesh reported flooding of villages due to heavy rains and tidal surges. Three people were dead, two by drowning and a third who was hit by a tree, an official at the Disaster Management Agency said. "I have never seen a tidal surge rising to this level. It flooded many villages and washed away houses. Many people are marooned," Humayum Kabir, an official in the coastal district of Khulna, said. Read more: India to move over a million people to safety as cyclone approaches Yaas had weakened on Thursday to a deep depression as it drove inland over the Indian state of Jharkhand. Elsewhere on the sub-continent, Nepal was bracing for floods in its plains and landslides in the hills as heavy rains have lashed the country since Wednesday and were forecast to last till Saturday. People living on riverbanks must be alert and climbers should return from the mountains, Nepal's National Disaster Risk Reduction and Management Authority said in a statement.
Published Date: 27-May-2021
Share:  Linkedin   Whatsapp   Facebook