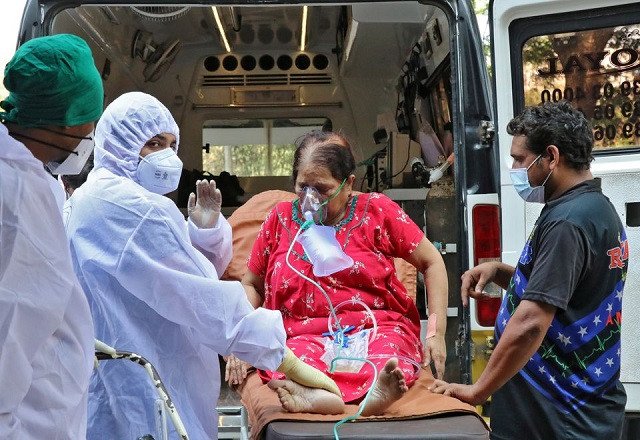 Description: India's total Covid-19 caseload surged past 25 million on Tuesday as a powerful cyclone complicated the health crisis in the western states of Gujarat and Maharashtra, already among the hardest hit by a second wave of the pandemic. Covid-19 tests were administered to 200,000 people evacuated from coastal districts of Gujarat before the cyclone struck late on Monday and efforts were being made to try to limit any spread of infections. "Masks have been arranged for people shifted to shelter homes," said Sandip Sagale, a top official in Ahmedabad, the main city in Gujarat. "Efforts are also made to maintain social distancing." India's total tally of coronavirus cases now stands at 25.23 million, health ministry data showed, following 263,533 new infections over the past 24 hours, while fatalitiesrose by a record 4,329. The official total death toll is 278,719. Read: PM Modi's rating falls as India reels from Covid-19 second wave The government said about 98% of India's population of 1.3 billion remained susceptible to infections. Only the United States has had more cases, or a worse single day death toll, when it lost 5,444 people on Feb. 12. But whereas the epidemic there peaked months ago, there is no certainty that India's infections have. Though the official count shows new infections subsiding, there are fears that the new, highly infectious B.1.617 variant, first found in India, is out of control and that many cases are going unreported due to lack of testing. Gujarat, Prime Minister Narendra Modi's home state, has suffered a 30% increase in infections since May 2, while the total number of vaccinations it administered last week was just 1.1 million - half the total of a month earlier. The storm, which has killed at least 19 people and caused widespread devastation,has exacerbated efforts to tackle the pandemic in Gujarat,with vaccinations suspended and hospitals awaiting back-up generators to keep power running and additional oxygen supplies. Vaccinations are likely to remain suspended at least until Wednesday, a government official said. But Aayush Oak, a top official in Amreli, the district hardest hit by the cyclone, said preparations had paid off. "We had already shifted Covid patients from areas closer to the coast to hospitals in other places three days back and did not need to shift a single patient more. There is no disruption of oxygen supply to any hospital," Oak said. Sunaina Tomar, energy secretary in Gujarat state, said 81 hospitals designated for coronavirus patients had faced power supply disruption, along with 16 other hospitals, and 19 oxygen refilling plants. "Power supply has been restored to 29 Covid hospitals, 12 other hospitals, and six oxygen units, and work to restore supply is going on at a war footing at other places," she said in a statement. Gujarat's health secretary Jayanti Ravi said teams were working to ensure that roads remained clear for emergency medical requirements despite the damage caused by the cyclone. People shop at a crowded vegetable market amidst the spread of the coronavirus disease (Covid-19) in Mumbai, India, May 11, 2021. PHOTO: REUTERS 'Struggling' vaccination drive In neighbouring Maharashtra state, which was sideswiped by the cyclone on Monday, 1,000 coronavirus deaths were reported overnight - the worst toll nationwide. The infection rate there has soared 15% in the last two weeks, government data showed. The pace of vaccinations in Maharashtra has fallen 30% since peaking in early April, data from the government's Co-WIN portal showed. Since April 1, 269 doctors nationwide have died of Covid-19, 78 of them in the mostly rural state of Bihar, the Indian Medical Association said. "The surge has been very devastating," its secretary-general, Jayesh Lele, told Reuters. In the northern state of Uttar Pradesh, home to more people than Brazil, rural areas have been severely hit, as healthcare systems have struggled to cope. Incensed by scarce testing and tracing, a state court said on Monday the situation was turning to "God's mercy" and hurtling towards a third wave. "If this is the state of affairs of five districts, one can guess where we are leading people of this state to, i.e. (a) third wave of the pandemic," said the Allahabad High Court. Modi's popularity has fallen to 63%, its lowest since US data intelligence firm Morning Consult began tracking it in 2019, amid the criticism of his government's handling of the pandemic. Read more: India unlikely to resume sizable Covid-19 vaccine exports until October Chandrakant Lahariya, a public policy and health systems expert, said in the Hindustan Times newspaper that India's vaccine policy urgently needed a reset. "The political leadership should give a free hand to technical experts to decide and implement new strategies," he said. India, the world's largest vaccine maker, halted exports a month ago after donating or selling more than 66 million doses, and government sources told Reuters it was unlikely to resume major exports of vaccines until at least October to prioritise domestic needs. The Serum Institute, India's largest vaccine producer, said it would continue to scale up its production of AstraZeneca's Covid-19 vaccine and start exporting to other countries by the end of the year. India is one of the countries likely to benefit from US President Joe Biden's announcement on Monday that his administration would send at least 20 million more Covid-19 vaccine doses abroad by the end of June.
Published Date: 19-May-2021
Share:  Linkedin   Whatsapp   Facebook