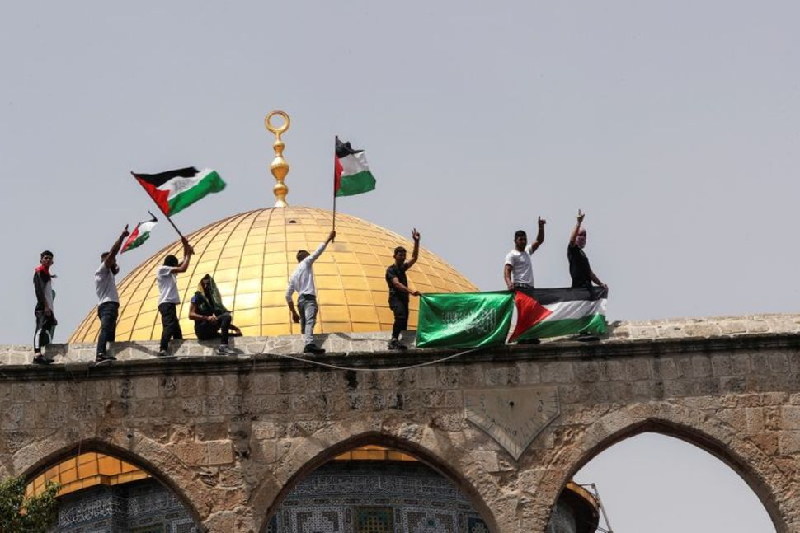 Description: Israel and Hamas both claimed victory on Friday after their forces ended 11 days of fighting, but an attack on Palestinians at Al Aqsa mosque underscored the fragility of the truce. Egypt, which mediated the pre-dawn end to the worst hostilities between Israelis and Palestinians in years, discussed measures to avoid a resumption of the rocket attacks from Gaza on Israel and Israeli strikes on the enclave. The Gaza violence was set off on May 10 in part by Israeli police raids on the Al Aqsa mosque compound and attacks on Palestinians during the Muslim holy month of Ramazan. Thousands gathered there again for this Friday's prayers, with many staying on to demonstrate in support of Gaza. Israeli police, Palestinians in fresh clashes at Al-Aqsa compound. ???? @gharabli_ahmad #AFP https://t.co/ov170HkYNo pic.twitter.com/QE4qLpDu9I — AFP Photo (@AFPphoto) May 21, 2021 Israeli police fired stun grenades towards demonstrators, who threw rocks and petrol bombs at officers, and Palestinian medics said some 20 Palestinians were wounded. The confrontations died down within about an hour, with Israeli police pulling back to the compound's gates. In Gaza, five more bodies were pulled from the rubble in the densely populated Palestinian enclave, taking the death toll to 243, including 66 children, with more than 1,900 wounded. The Israeli military said an Israeli soldier had been killed as well as 12 civilians; hundreds have been treated for injuries after rocket salvoes that caused panic and sent people as far away as Tel Aviv rushing into shelters. Palestinians who had huddled in fear of Israeli shelling poured into Gaza's streets, embracing one another in celebration in front of bombed-out buildings. Mosque loudspeakers feted "the victory of the resistance" and cars drove around flying Palestinian flags and honking horns. Egypt said it would send two delegations to monitor the truce, which began at 2 am (2300 GMT), as the warring parties said they were ready to retaliate for any violations. Israeli Prime Minister Benjamin Netanyahu said the operation had damaged the ability of Hamas, the group which runs Gaza, to launch missiles at Israel. Netanyahu said the Israeli military had attacked and destroyed Hamas’s extensive tunnel network in Gaza, its rocket factories, weapons laboratories and storage facilities, and killed more than 200 militants, including 25 senior figures. "Hamas can't hide anymore. That's a great achievement for Israel," he said in a televised address. "We eliminated an important part of Hamas's and Islamic Jihad's command echelon. And whoever was not killed knows today that our long arm can reach him anywhere, above ground or underground." Hamas chief Ismail Haniyeh cast the fighting as successful resistance to a militarily and economically stronger foe, and said it would recoup lost military capabilities. "We will rebuild what the occupation (Israel) destroyed and restore our capabilities, and we will not abandon our obligations and duties to the families of martyrs, the wounded and those whose homes were destroyed," he said. Haniyeh expressed gratitude to Egyptian, Qatari and UN mediators for their support, and thanked "the Islamic Republic of Iran, which has not given up on providing the resistance with money, weapons and technology".
Published Date: 21-May-2021
Share:  Linkedin   Whatsapp   Facebook