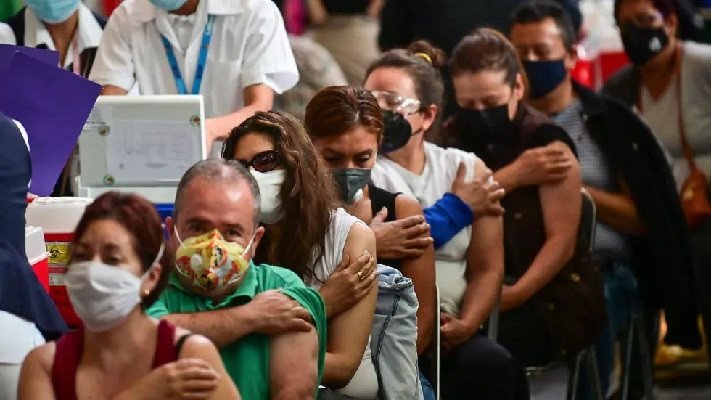 Description: A steady decline in coronavirus cases and rising levels of immunity from vaccination or infection suggest that the worst of the pandemic may be over for hard-hit Mexico, experts say. The improvement has led to a gradual loosening of lockdown measures, paving the way for children to go back to classrooms and spectators to return to sports stadiums and wrestling tournaments. The outlook "is hopeful," said epidemiologist Alejandro Macias, who led Mexico's fight against the swine flu pandemic in 2009. Another major wave of infections across the country now seems unlikely, although there is a risk of limited outbreaks in areas with little immunity, he told AFP. Mexico's confirmed Covid-19 death toll of more than 222,000 is the fourth highest in the world, and the government acknowledges that the real figure is probably much higher. Deaths "associated with Covid-19" were estimated to be more than 337,000 as of March 15, according to excess mortality figures released by the government. But after a surge in infections in January, fatalities and hospitalizations have now fallen for 20 straight weeks. "The pandemic continues to lose strength," President Andres Manuel Lopez Obrador said this week, adding that there was no reason to fear a major resurgence.  Natural immunity On January 20, Mexico registered a peak of around 1,800 daily deaths, with an average of 1,180 fatalities a day over the preceding week. That has now dropped to an average of around 200 a day. "A lot of people have already been infected and have immunity. There are fewer people left for the virus to infect," Macias said. Another major factor is that many of the highest risk people over the age of 60 have now been vaccinated. In May the government also began inoculating people aged 50 to 59 and says it expects vaccine supplies to increase in the coming weeks. On Thursday the Mexican health regulator added the Johnson & Johnson shot to the list of vaccines approved for emergency use. "Although vaccination is slow, it adds to immunity little by little," said Macias. The government aims to have all people over the age of 18 vaccinated by October. So far more than 20 million people, or 22 percent of all adults, have had at least one coronavirus vaccine dose and around 12 million are fully vaccinated, according to the health ministry. Read more: Malaysian volunteer undertakers struggle to cope as Covid cases surge Others have gone to the United States to be inoculated, taking advantage of its more advanced vaccination campaign, which is also thought to have helped to reduce cross-border infections. The fact that "the United States is controlling the epidemic also benefits us," said Mauricio Rodriguez, a member of a commission set up by the National Autonomous University of Mexico (UNAM) to monitor the pandemic. The arrival of spring is also thought to have helped since coronaviruses spread more easily in winter, experts said. Caribbean hotspot Mexico has registered 2.4 million confirmed Covid-19 cases, of which nearly 17,000 are active. But this is thought to be just the tip of the iceberg due to limited testing in the country of 126 million. Malaquias Lopez, an epidemiologist at the UNAM, said infections may be occurring now in younger people who do not require hospitalization because they do not become seriously ill. "It is very difficult to interpret the figures in Mexico because very few tests are done," he said. This month Mexico City moved to yellow status, the second lowest of four under the country's traffic-light system, leading to a further easing of pandemic restrictions. The government authorized the return of schoolchildren to classrooms in the capital from June 7. Fans have been allowed to return to baseball and football games in limited numbers, and Mexico's legendary "lucha libre" wrestlers are once again performing in front of spectators in the capital. One virus hotspot is the southeastern state of Quintana Roo, home to a string of Caribbean resorts, where rising infections have raised the risk of a return to tough lockdown measures.
Published Date: 28-May-2021
Share:  Linkedin   Whatsapp   Facebook