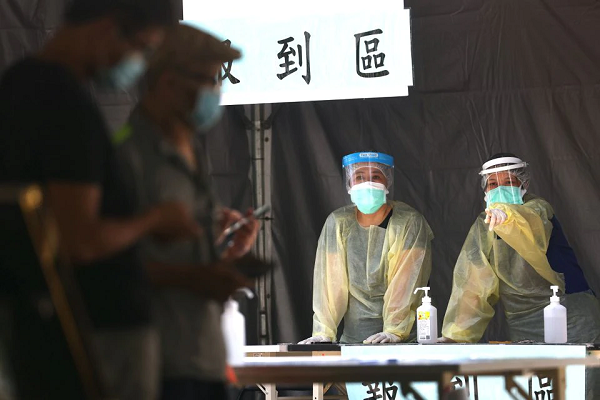 Description: Millions of COVID-19 vaccine doses are on their way to Taiwan, the health minister said on Tuesday, as he extended virus-related restrictions until the middle of June even though the trend in new infections is falling. Having spent months keeping the virus at bay with life relatively normal compared with many other places, Taiwan is dealing with a spike in domestic infections, exacerbated by a low vaccination rate of only about 1% of its population. Health Minister Chen Shih-chung said two million vaccine doses would arrive by the end of June and 10 million by the end of August, though he did not give details, only saying that the numbers included domestically developed vaccines. Taiwan has ordered more than 20 million doses from AstraZeneca and Moderna and is also developing its own vaccines. Chen, however, made no mention of China's offer on Monday to urgently send vaccines and medical staff, which has already drawn an angry response from Taiwan's government.  The minister said that while infection numbers had continued to fall since last Monday, positive rates remained high. While current measures were effective, Chen said he was concerned about "hidden spreaders" in the community, which the authorities were not able to detect due to a time lag in getting test results. "There has been no sudden deterioration," he said. His ministry has been criticised by the opposition for a logjam with recording positive COVID-19 tests due to reporting delays following the surge in cases.  Read more: US reports lowest number of new COVID-19 cases in nearly a year Chen said that was a concern for the virus to spread further. "The worry is that...we are not able to control the hidden cases during this time period, which could lead to a worsening pandemic," Chen said. Authorities are also scrambling to track the whereabouts of 300 people who were tested positive for COVID-19 in the capital Taipei and neighbouring New Taipei City, Chen said, urging local governments to work with the police to find those patients. Taiwan's level-three measures, one rung below its highest alert level, would be extended until June 14, with schools and entertainment venues remaining closed and personal gatherings restricted, Chen added. Taiwan has reported 5,456 infections since the pandemic began, with 35 deaths.
Published Date: 25-May-2021
Share:  Linkedin   Whatsapp   Facebook