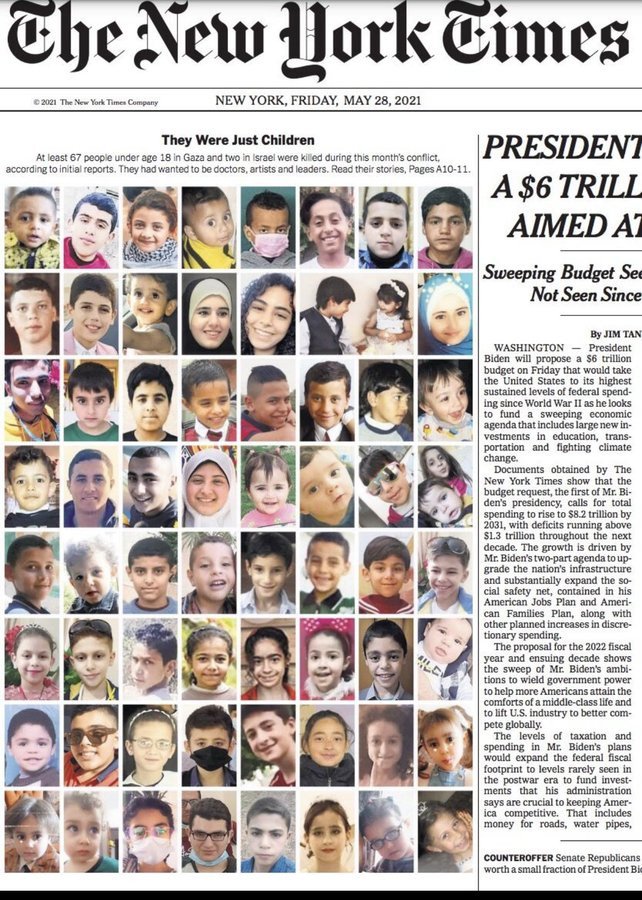 Description: The New York Times published a front-page collage of the children killed in Gaza on Friday, May 28, 2021. Almost 70 children... Thanks to the NYT for humanizing these numbers.???? pic.twitter.com/v9rsXwDlUF — Joy N. Ismail, PhD (@joynismail) May 29, 2021 The al-Hadidi brothers were asleep, their father said, when an Israeli bomb killed them, their mother, their aunt and four cousins. Suheib loved birds. Yahya liked riding his bike. Osama was known for his style. And Abdurrahman dreamed of going to Turkey. https://t.co/v40FIMwrKR pic.twitter.com/jdp7dmUvmc — The New York Times (@nytimes) May 26, 2021 During the last two weeks, Israel's bombardment of Gaza has killed at least 67 children, the article on NYT read. It also shed light on the identities of all 67 minors; the circumstances of their deaths; and the grief and disbelief of their parents - reiterating the constant threat of war haunting the Palestinian children. The NYT, in the article, also estimated that an average 15-year-old in Gaza would have lived through four major Israeli offensives. To Everyone's Amazement: This article comes as a surprise to many, since parenthetically, on May 22, the same newspaper had published a rather pro-Israel advertisement, condemning Dua Lipa, Gigi and Bella Hadid, celebrities who protested against the genocide happening in Palestine. Amazing to see this on the front page of the NYT pic.twitter.com/36OFJlVGgX — Siyad_59 (@oye_mashwani) May 29, 2021 Positively surprising to find out this got through. Someone please check on the editor's wellbeing over at the NYT. What happened here? #peacejournalism pic.twitter.com/zvLTlNX0M0 — Conflicts≠Violence (@JohanGaltung) May 29, 2021 This is on the NYT. Not what I would expect at all but glad they did it#FreePalestine #gaza pic.twitter.com/VIDhOdUipr — FREE PALESTINE ???????? ???????? ???????? (@VeganTroveExtra) May 29, 2021 Thanks @nytimes for Finally saying what is right. Unlike the cowards in cable networks e.g @CNN @FoxNews #TruthMatters @hrw @UNHumanRights pic.twitter.com/HpgBpSu3R4 — Dayib (@Dayib1) May 29, 2021 This is not a number; these 67 children were killed in Gaza because of Netanyahu's airstrikes. (Image- The New York Times) pic.twitter.com/JxKXoOBbmj — Ashok Swain (@ashoswai) May 28, 2021   While Twitteratis around the world were pleasantly surprised by the front-page article, Palestinian writer Mohammed El-Kurd gave them a reality check by asking them to hold NYT accountable for years of publishing anti-Palestinian content. "The NYT’s has participated in shaping and spreading anti-Palestinian racism and Israeli propaganda for decades. This will not be reversed by an obituary that depoliticizes genocide. And btw, when we mourn, we mourn all of our martyrs, not just our children," he wrote. The NYT’s has participated in shaping and spreading anti-Palestinian racism and Israeli propaganda for decades. This will not be reversed by an obituary that depoliticizes genocide. And btw, when we mourn, we mourn all of our martyrs, not just our children. — Mohammed El-Kurd (@m7mdkurd) May 29, 2021   NYT's coverage comes a day after the Israeli Hebrew-language daily Haaretz published photos of the 67 children killed in Gaza. The front-page headline read: 'This is the price of war,' while the third page read: 'The names and the stories of the young victims of the conflict' and 'When leaders unleash a war, the weakest pay the price.' Many praised the objectivity of the Israeli newspaper and restated that the children were the real victims of the endless 'conflict' between Israel and Hamas. Going against Israel's mainstream media practices, today's Hebrew edition of Haaretz publishes the photos of the 67 children who were killed in Gaza.#Gaza https://t.co/lEk9FEN0mN — Khaled Diab (@DiabolicalIdea) May 27, 2021 This is @Haaretz first page in Israel today. We Israelis, mourn the loss of every child killed in this fight. Theirs and ours. Show me another society grieving for the children of its so called enemy. Demonizing us with apartheid, and colonial slurs is unjust and inane. pic.twitter.com/wro02fMxxO — Ohad Nakash Kaynar (@KaynarOhad) May 27, 2021 Israel's Haaretz newspaper does such bold journalism. Yesterday's front page had the photographs of 67 Palestinian children killed in IDF attacks on Gaza. Bravo. Via @SaimaMohsin pic.twitter.com/LXDprDvZii — Abbas Nasir (@abbasnasir59) May 28, 2021   However, netizens seemed more concerned over the sudden change in NYT's stance. Politically (In)correct: As people world over argued that the NYT finally conveyed a strong sense of journalistic objectivity, some Twitteratis put up tone-deaf statements about antisemitism and the 'blood libel' of Israel. I am cancelling my subscription to NYTimes. I grew up in America on the NYT- I delivered the NYT to my classmates- I learned civics- democracy and all the news”fit to print” for 65 years but no more. Today’s blood libel of Israel and the Jewish people on the front page is enough — Abraham Foxman (@FoxmanAbraham) May 28, 2021 American-Israeli scholar Martin Kramer joined in, saying he will not retweet the NYT from hereon. I haven’t subscribed in ages. Now I won’t even tweet the @nytimes. Just like I don’t tweet the Electronic @Intifada, its sister publication. pic.twitter.com/oo5acYSf2u — Martin Kramer (@Martin_Kramer) May 29, 2021 While others simply pointed out the logical fallacy in the article - the photo of a girl that was published in 2017. Hey @nytimes, how do you think Israel manages to kill the same child every war? pic.twitter.com/gh5W8aM6Z6 — Hussein Aboubakr Mansour (@HusseinAboubak) May 29, 2021 To which, their Middle-East Editor Herbert Buchsbaum posted a correction: @herbertnyt Looking forward to the upcoming Times' photo essay showing the faces of the hundreds of Israeli children Hamas, Islamic Jihad, other terror groups have murdered over the decades. — Michele Chabin (@MicheleChabin1) May 29, 2021   After eleven days of deadly violence in the Gaza strip, both sides have agreed to a fragile truce that suspends hostilities between Israel and Hamas.
Published Date: 30-May-2021
Share:  Linkedin   Whatsapp   Facebook