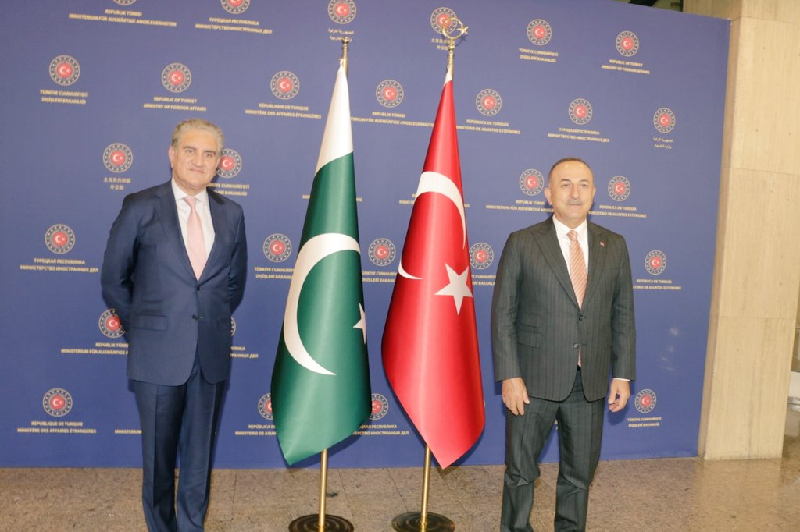 Description: Foreign Minister Makhdoom Shah Mahmood Qureshi met his Turkish counterpart Mevlüt Çavu?o?lu in Ankara and discussed ways to stop Israeli atrocities in Palestine. “The Foreign Minister is visiting Turkey to exchange views on the worsening situation in the Israeli Occupied Palestinian Territories,” a statement issued by the Foreign Office said on Tuesday. Met brother FM @MevlutCavusoglu in Ankara today. Nothing can shake our resolve as we stand shoulder to shoulder with the people of Palestine in their legitimate right to self-determination & establishment of independent state with pre-1967 borders & Al Quds Al Shareef as capital. pic.twitter.com/IWGteKcmcj — Shah Mahmood Qureshi (@SMQureshiPTI) May 18, 2021 During the meeting, the two foreign ministers discussed ways to mobilise the international community to help stop Israeli aggression against the Palestinians. It was reaffirmed that the international community has a collective responsibility in ensuring necessary steps to help address the dire situation, restore peace and facilitate a just solution, the communiqué added. Qureshi apprised his Turkish counterpart of the sentiment prevailing in Pakistan in support of the people of Palestine including the resolution unanimously adopted by the National Assembly. While taking stock of the excellent bilateral relations between the two countries, the two sides discussed the ongoing preparations for the 7th Session of the High-Level Strategic Cooperation Council (HLSCC) that will be held in Turkey this year. Foreign Minister Qureshi also reiterated appreciation for Turkey’s principled and steadfast support on the issue of Indian Illegally Occupied Jammu and Kashmir. Underscoring Pakistan’s abiding interest in a peaceful, secure and stable Afghanistan, he illustrated Pakistan’s consistent efforts to facilitate the Afghan peace process. He expressed the hope that the Afghan parties would seize the opportunity and work out an inclusive politically-negotiated settlement. The foreign minister also lauded Turkey’s valuable efforts to re-energise the Afghan peace process. Qureshi along with the foreign ministers of Turkey, Palestine and other countries, will be travelling to New York to participate in-person in a meeting of the UN General Assembly on the Palestine issue. Earlier, the Saudi Foreign Minister had convened a meeting of the OIC Executive Committee on Sunday to discuss the grim situation in Palestine. The foreign minister, as a member of the executive committee, had also addressed the meeting. As part of Pakistan’s diplomatic endeavours, Prime Minister Imran Khan and Foreign Minister Qureshi have reached out to a number of countries including Palestine, Turkey, Saudi Arabia, Egypt, Indonesia and others.
Published Date: 18-May-2021
Share:  Linkedin   Whatsapp   Facebook