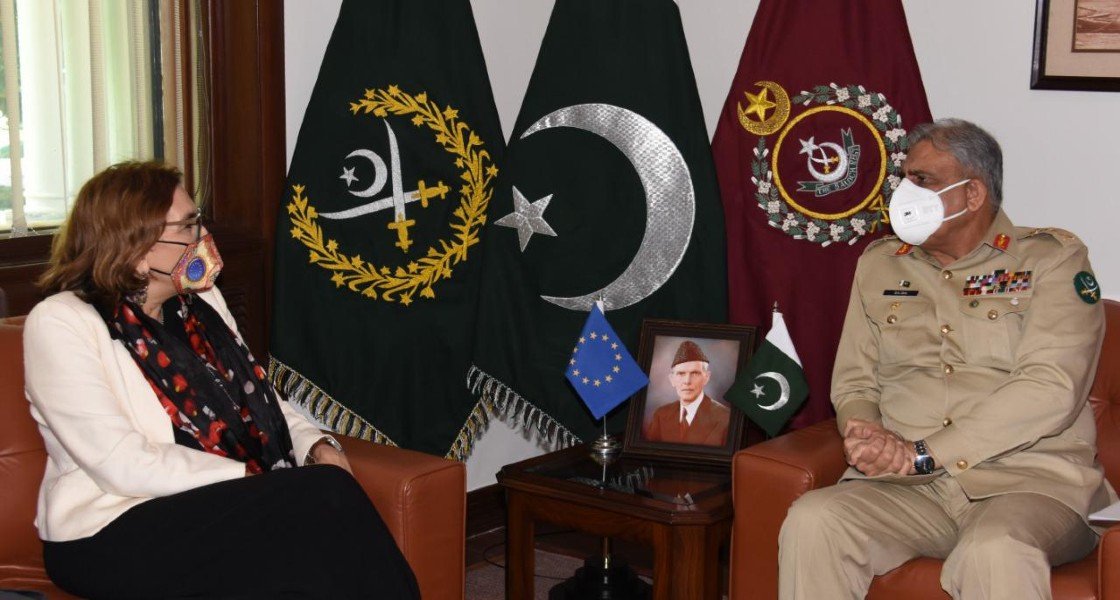 Description: Chief of Army Staff (COAS) General Qamar Javed Bajwa has said that Pakistan values its relations with the European Union (EU) and "we earnestly look forward to enhance mutually beneficial multi-domain relations based on common interests", a statement issued by the Inter-Services Public Relations (ISPR) said. The COAS expressed these remarks during a meeting with EU Ambassador Androulla Kaminara at the General Headquarters in Rawalpindi on Monday. The military's media wing said that matters of mutual interest, regional security situation including recent developments in the Afghan peace process were discussed during the meeting. The visiting dignitary appreciated Pakistan's sincere efforts for bringing peace and stability in the region, especially the Afghan peace process. Read Turkey, Pakistan, Afghanistan call on Taliban to commit to Afghan peace talks On Wednesday, General Qamar hoped for "greater cooperation" between Pakistan and the US in all domains, as Islamabad's efforts to reset ties with Washington has so far met with a lukewarm response from the Biden administration. The statement by the army chief came during a meeting with US Charge d' Affairs AngelaAggeler. The meeting is a part of ongoing efforts by the US to seek a political end to the Afghan conflict. The US diplomat met the army chief days after Gen Qamar visited Kabul along with the UK's chief of defence. The Inter-Service Public Relations (ISPR) said in a statement that during the meeting, matters of mutual interest, overall regional security situation, bilateral cooperation in various fields, fight against Covid-19 and recent developments in the Afghan peace process were discussed. Read more Afghan Taliban declares three-day ceasefire for Eid celebration this week The future of Afghanistan hangs in balance as despite efforts and the start of the withdrawal of troops, there is no or little progress on the peace deal. Taliban have refused to join the peace process after Biden extended the troops’ withdrawal deadline. Pakistan and other countries have been pushing the Taliban to join the Istanbul Conference, an initiative of the US to strike a peace deal.
Published Date: 17-May-2021
Share:  Linkedin   Whatsapp   Facebook