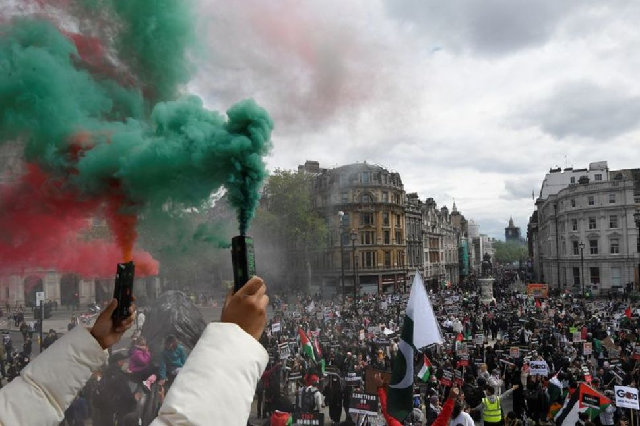 Description: Thousands of pro-Palestinian demonstrators marched through London and other British cities on Saturday to protest against Israeli air strikes on the Gaza Strip after Israel and Hamas reached a cease-fire agreement. LIVE: Thousands of protesters march in central London in support of Palestine. https://t.co/PQpCJR0sNi — Al Jazeera English (@AJEnglish) May 22, 2021 Protesters called for sanctions on Israel during the march in London. Some were draped in Palestinian flags and set off green and red smoke flares. Others carried banners declaring "Free Palestine", "Stop bombing Gaza" and "Sanctions on Israel". ???????? Stockholm ???????????????????????????? London ???????? Bologna ???????? Vienna Thousands of demonstrators across Europe continued to show solidarity with the people of Palestine on Friday after Israel and Hamas reached a cease-fire agreement https://t.co/yz625amd78 pic.twitter.com/6kgkBWohsM — ANADOLU AGENCY (@anadoluagency) May 22, 2021 At least 15 demonstrators were arrested in Stockholm during a protest organised in support of Palestine. Demonstrators gathered in Medborgaplatsen Square to protest Israel's attacks on Palestinians in a rally organized by Palestinian associations. Protesters chanted: "Boycott Israel," "Free Palestine," and "Israel is killing our children." Activist Dror Feiler, a Swedish Jew born in Israel, attended the demonstration to show solidarity with Palestinians. “A ceasefire has been reached between Israel and Palestine, but our struggle for the freedom of Palestine will continue. As a Jew, I am showing my support to the people of Palestine,” Feiler told Anadolu Agency. Police asked protesters to disperse as part of coronavirus restrictions. When they refused to leave, police intervened and detained 15 people. Police, trying to prevent journalists from recording the protest, detained freelance journalist Orhan Karan and seized his camera. He was later released and his camera was returned. In Vienna, protesters at two different locations gathered for pro-Palestinian demonstrations, despite a ban. Tensions that started in East Jerusalem during the Muslim holy month of Ramazan spread to Gaza as a result of Israeli assaults on worshippers in the flashpoint Al Aqsa mosque compound and the neighbourhood of Sheikh Jarrah. The escalation resulted in airstrikes by Israel on Gaza, which has left at least 243 Palestinians dead and more than 1,700 others wounded since May 10, according to Palestinian authorities. A cease-fire between Israel and Palestinian resistance group, Hamas, started early Friday. Israel occupied East Jerusalem during the 1967 Arab-Israeli war and annexed the entire city in 1980 – a move that has never been recognized by the international community.
Published Date: 22-May-2021
Share:  Linkedin   Whatsapp   Facebook