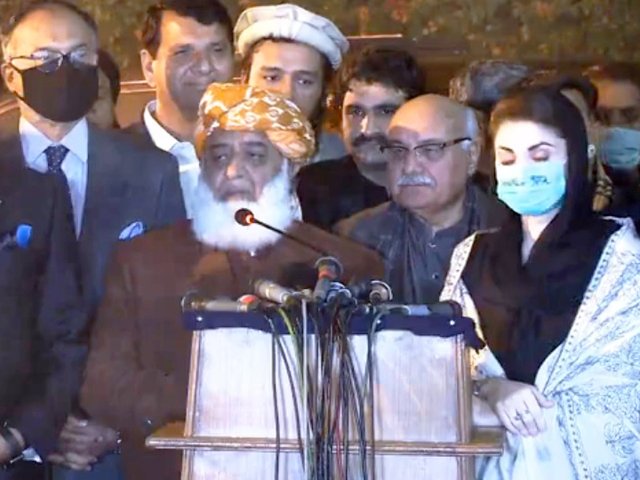 Description: Jamiat Ulema Islam- Fazl (JUI-F) chief Maulana Fazlur Rehman and Pakistan Muslim League-Nawaz (PML-N) President Shehbaz Sharif agreed on Monday to convene a session of the Pakistan Democratic Movement (PDM) by the end of May. According to Express News, the agreement was reached during a telephonic conversation between the PDM president and the leader of the opposition in the National Assembly. During the conversation, the two opposition leaders held detailed consultations about the political situation in the country. Fazl would soon announce the final date of the PDM session after contacting the other leaders in the anti-government alliance. Serious differences emerged between the parties after the Pakistan Peoples Party (PPP) appointed its stalwart Yusuf Raza Gilani as Senate’s opposition leader, apparently in violation of what had earlier been agreed upon in a PDM meeting. Both the Awami National Party (ANP) and the PPP parted their ways with the alliance last month. Read more PML-N laments PPP’s ‘disinterest’ in en masse resignations Five opposition parties including the PML-N agreed to form a separate bloc of 27 opposition senators in the upper house of parliament. Earlier, leaders of eight opposition parties agreed that “show cause notices” should be issued to the PPP and the ANP for disregarding the PDM’s decision, said sources. They said the parliamentary leaders of the eight parties decided that the show cause notices should be issued with the approval of PDM chief Maulana Fazlur Rehman. Sources said the eight parties have decided to first give a chance to the PPP and the ANP to explain their position and if they couldn’t satisfy then they will be expelled from the alliance. On April 4, the PPP – announced a raft of decisions to further undermine its usefulness as deterrence against the government. Chairman Bilawal Bhutto Zardari said that some PML-N members might have been finding it difficult to swallow the news of the nomination of Gilani’s as opposition leader in the Senate.
Published Date: 17-May-2021
Share:  Linkedin   Whatsapp   Facebook