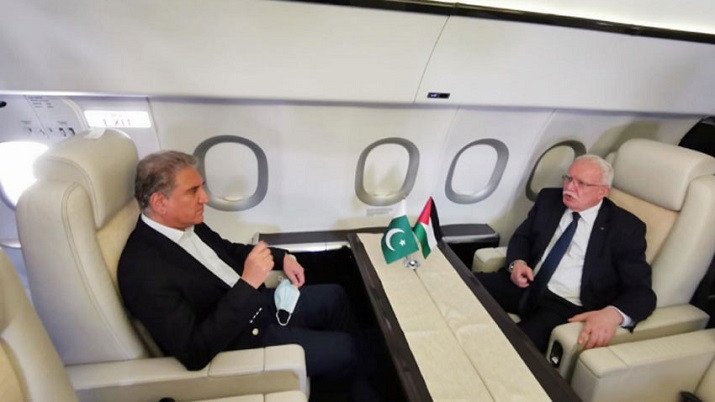 Description: Foreign Minister Shah Mehmood Qureshi left for New York from Ankara on Wednesday, continuing his diplomatic peace mission against the ongoing Israeli atrocities targeting the people of Gaza. The minister is accompanied by his counterparts from Palestine, Sudan and Turkey during the visit. Qureshi will attend an emergency meeting of the United Nations General Assembly tomorrow and will draw the attention of the international community towards the ongoing Israeli agression against the Palestinians. He will urge the world body to play its due role in bringing an end to the atrocities. The minister will also hold important meetings with the UNGA president and other diplomats to highlight Pakistan's stance on regional and international issues, with a focus on the situation in Palestine. Also read FM Qureshi banks on UNGA to play role for Palestine Prior to his departure, Qureshi held a meeting with his Palestinian counterpart Riyad al-Maliki wherein he exchanged views over the evolving situation in the besieged Gaza. During the meeting, he conveyed the resolve of the Pakistani leadership, especially Prime Minister Imran Khan, to continue supporting the Palestinian struggle for their right to self-determination. The minister strongly denounced Israeli aggression against the people of the occupied territory. Earlier today, during an interview with the Anadolu Agency, Qureshi said Pakistan is banking on the UNGA to play its role to evolve a consensus that leads to a cease-fire, de-escalation and an end to atrocities in Palestine. Regarding the US' veto power on the Security Council, he said that public opinion should veto the veto power and if public opinion changes, governments that exercise veto power, are compelled to revisit policies and are compelled to rethink.
Published Date: 19-May-2021
Share:  Linkedin   Whatsapp   Facebook