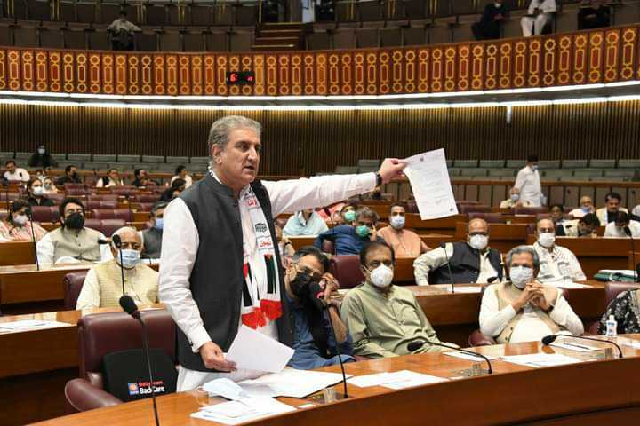 Description: The National Assembly has unanimously passed a resolution condemning Israeli atrocities against the people of Palestine. The resolution which was tabled by Foreign Minister Shah Mahmood Qureshi on Monday strongly condemned the systematic and institutionalised oppression of Palestinians by Israel. Live Stream: Minister of Foreign Affairs Shah Mahmood Qureshi... It also denounced the systematic and brutal disenfranchisement, exclusion and ethnic cleansing of the people of Palestine. It denounced the attacks by the apartheid Israeli regime on worshippers in Al Aqsa mosque during Ramazan and attempts to stop the Azaan. It denounced and rejected the continuing practice of expanding settlements through forced evictions by the apartheid regime in violation of Fourth Geneva Convention. The resolution condemned the deliberate destruction of buildings, housing local and international media outlets in Sheikh Jarrah and Jerusalem, carried out with the intent to erase evidence of genocide being committed against the Palestinian people. It reaffirmed Pakistan’s unwavering support for the realization of the right to self-determination and other fundamental rights of Palestinians as well as for the two-state solution, based on the pre-1967 borders, and a free, secure, viable, independent and contiguous State of Palestine with Al-Qud Al-Sharif as its capital. The house called upon the UN Security Council to take necessary action to bring to an end the ongoing crimes against humanity being perpetrated against Palestinians. It urged the United Nations to ensure Israel’s compliance with the resolutions passed by the UNSC, UN General Assembly and Human Rights Council, reaffirming the right to self-determination of the Palestinians. The resolution called upon the UN to ensure Israel’s compliance with the Fourth Geneva Convention relative to the Protection of Civilian Persons in time of war and take actions to immediately halt Israeli aggression, which has violated the sanctity of Al Aqsa Mosque, which is a holy site for over 1.5 billion Muslims, and respect their freedom to worship and allow unfettered access to Muslims to repair any damage done to the religious holy sites by Israel’s criminal actions. The National Assembly called upon the UN secretary general to establish an independent inquiry tribunal to investigate the crime of genocide by the “apartheid Israeli regime” against the people of Palestine. It demanded that the international community should ensure accountability for all past and present grave human rights violations and crimes against humanity being perpetrated against Palestinians through fair, impartial and independent accountability and trials. The resolution called upon the OIC to take immediate decisive steps for the protection and safety of the Palestinian people and to break the illegal Israeli blockade of Gaza to provide humanitarian assistance. Addressing the lower house of parliament on Monday, PML-N President and Leader of the Opposition Shehbaz Sharif urged the government to take all-out steps to highlight the plight of the people of Palestine and Indian Illegally Occupied Jammu and Kashmir (IIOJK). #Live: Foreign Minister Shah Mahmood Qureshi addressing in National Assembly https://t.co/N1JQZp2699 — Radio Pakistan (@RadioPakistan) May 17, 2021 He condemned the world powers over their lukewarm reaction to the Israeli airstrikes on Palestinians which has so far killed more than 200 people including children and women. Briefing the house, Foreign Minister Shah Mehmood Qureshi said Pakistan is making all-out efforts to stop indiscriminate Israeli attacks on Palestinians. He said Palestinian leadership has also acknowledged the initiatives being taken by Pakistan against Israel’s aggression. {{pdf}} Gaza residents cowered indoors on Monday after Israeli jets pounded the enclave, as violence that has killed more than 200 people — overwhelmingly Palestinian — entered a second week. Before dawn, in the space of just a few minutes, dozens of Israeli strikes bombarded the crowded Palestinian coastal strip controlled by Hamas, according to AFP journalists and the army. Flames lit up the sky as intense explosions shook Gaza city, sparking widespread power cuts and damaging hundreds of buildings, local authorities said. Some 3,100 rockets have also been fired by Palestinians towards Israel since conflict escalated on May 10 in the heaviest exchange of fire between the rivals in years, sparked by unrest in Jerusalem. (With input from Radio Pakistan)
Published Date: 17-May-2021
Share:  Linkedin   Whatsapp   Facebook