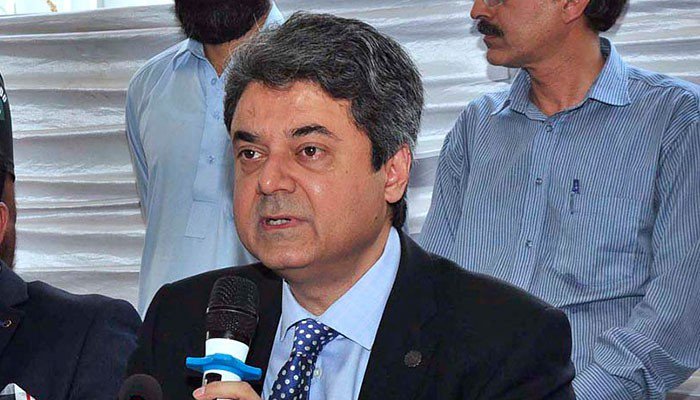 Description: Minister for Law Barrister Farogh Naseem said on Wednesday that an out-of-court settlement with the Tethyan Copper Company (TCC) was still not out of question. A day ago, on May 25, the High Court of Justice in the British Virgin Islands (BVI) decided the Pakistan International Airlines would retain its two assets — Roosevelt Hotel in New York and Scribe Hotel in Central Paris — retracting its earlier order to attach these properties with the enforcement of Reko Diq penalty on the request of the Tethyan Copper Company (TCC). "We told the TCC there won't be any corruption this time," he said while addressing a press conference in Islamabad today. The company, he added, responded saying, "[the assurance] is music to the ears." "At the international tribunal, we had held the stance that the Reko Diq deal was a result of corruption." The Supreme Court, he maintained, had annulled the agreement due to that corruption, the law minister added. "A deal that's an outcome of corruption doesn't come under the ambit of legal investment." The minister highlighted that the BVI high court accepted the aspect regarding the sovereign exemption, which will help in [resolving the] the original case. Read Virgin Islands court puts off Reko Diq case hearing till 18th The TCC has till June 4 to appeal against the decision of the BVI, he further stated. "It is true that the BVI's decision is related to PIA hotels," he said, adding that it is "crucial in terms of giving our economy a support that our stance was approved in the court." He noted that in the past, tribunal's ambit has been accepted only after a notice of mediation was received. Naseem congratulated the entire nation, especially Prime Minister Imran Khan and his Cabinet, for success in the Reko Diq case. "[Pakistan was facing] a penalty of $6.5 billion dollars internationally in the Reko Diq case, besides other cases including the Karkey dispute." In 2019, he stated, "The premier appointed me as the chairman of the committee in the Reko Diq case. We went to the US and the UK and met the lawyers [there]." "We replaced many lawyers,' he said, adding that, "Anwar Mansoor Khan, Khalid Javed, and Ahmed Irfan Aslam made immense efforts [to resolve the case]." Ahmed Irfan Aslam was bestowed with Sitara-e-Imtiaz on the recommendation of the law ministry, he maintained. Earlier, while commenting on the decision, the spokesperson of the law and justice ministry termed the decision a major victory for Pakistan. Due to the verdict, he said, the country's assets of billions of rupees got saved from being auctioned or frozen. "All decisions against the PIA have been withdrawn. Pakistan has got back [ownership of] Roosevelt and Scribe hotels due to the decision." Pakistan effectively defended its stance against the plea filed by the TCC company, which will now have to bear all the costs of the case, Farogh added. Reko Diq case On November 20 last year, the TCC had sought attachment of assets for the enforcement of the $6 billion award that the International Centre for Settlement of Investment Disputes (ICSID) slapped on Pakistan on July 12, 2019, for revoking a mining contract in Reko Diq, Balochistan. Read more Investment treaties and FDI Despite the withdrawal of attachment orders by the BVI court, the $6 billion award against Pakistan stands intact. The ICSID stayed the enforcement of the $6b penalty and on September 17 and issued a 70-page order which said the stay would continue on a conditional basis. The arbitrator ordered Pakistan to provide an “unconditional and irrevocable” bank guarantee or the letter of credit for 25% of the award, plus accrued interest as of the date of the decision. The guarantee or letter of credit was to come from a reputable international bank based outside of Pakistan, which was pledged in favour of the claimant -- the TCC -- and to be released on the order of the ICSID. The ICSID also held that if Islamabad could not furnish the security and undertaking in terms as set out within 30 days after notification of the decision, the stay of enforcement in the amount of 50% of the award, plus the accrued interest as of the date of the decision would be lifted. However, Pakistan missed the deadline and did not deposit 25% bank guarantee.
Published Date: 26-May-2021
Share:  Linkedin   Whatsapp   Facebook