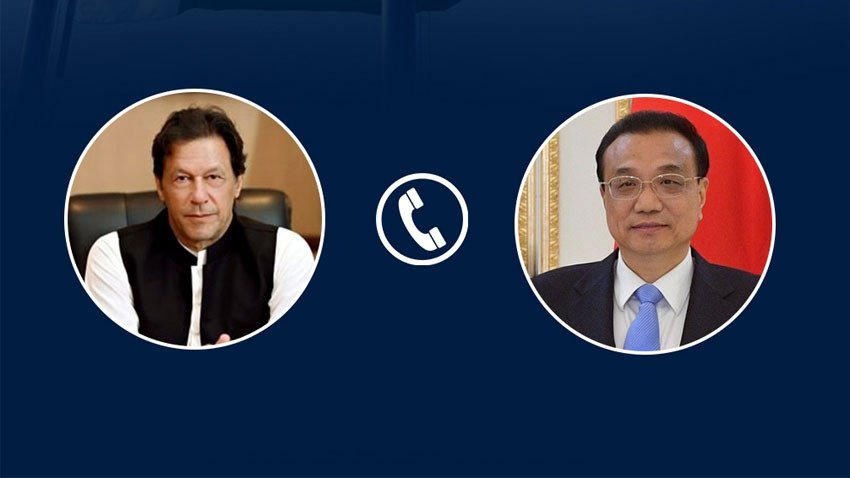 Description: Prime Minister Imran Khan and Chinese Premier Li Keqiang on Thursday reaffirmed their resolve to further solidify Pakistan-China bilateral relations. The commitment was reiterated during a telephonic conversation between the two leaders as part of the 70th anniversary of the establishment of Pakistan-China diplomatic ties. During the call, the prime minister congratulated the Chinese premier on the special occasion, that would be celebrated by both the sides in a befitting manner. According to reports, both the leaders stressed the need to continue with the momentum of high-level exchanges to further diversify and deepen strategic cooperation between the two countries. PM Imran further emphasised that with the collective and tireless efforts over the years Pakistan and China had transformed their relationship into an “All-Weather Strategic Co-operative Partnership”. Read more China, Pakistan to hold activities marking 70 years of diplomatic ties "The China-Pakistan Economic Corridor (CPEC) is a flagship project of the Belt and Road Initiative and has generated economic activity, employment and will further enhance bilateral and regional trade," the premier said. The year 2021 is a special occasion as it marks the 70th anniversary of the establishment of diplomatic relations between Pakistan and China, he added. PM Imran also highlighted Pakistan-China cooperation in fighting Covid-19 and deeply appreciated China’s continued support to Pakistan in the supply of the Covid-19 vaccine. He thanked China for providing assistance to the National Institute of Health (NIH) for establishing a vaccine manufacturing facility in Pakistan that would further solidify the country's efforts to combat Covid-19. Prime Minister Imran also congratulated Premier Keqiang and the Chinese leadership for the successful landing of the Chinese spacecraft on Mars, that showed the rising technological prowess of China.
Published Date: 20-May-2021
Share:  Linkedin   Whatsapp   Facebook