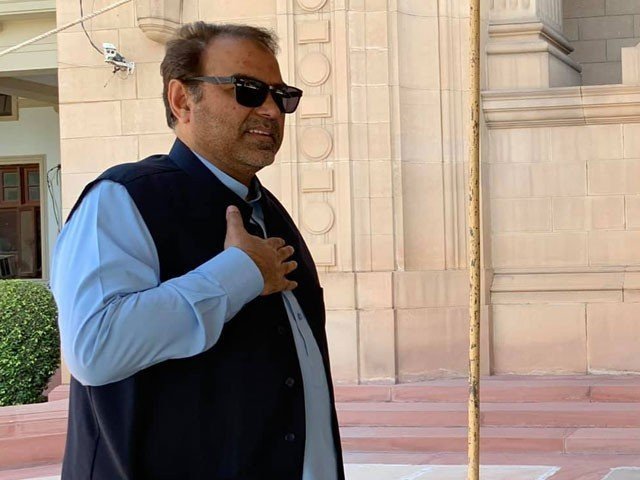 Description: A day after a case was registered against Nazir Chohan — a PTI MPA belonging to the estranged Jahangir Tareen group — on the complaint of Adviser to the PM on Accountability and Interior Shahzad Akbar, the former reached Lahore’s Race Course Police Station to surrender but police officials refused to take him into custody on Sunday. The FIR was lodged under sections 506 (punishment for criminal intimidation), 189 (threat of injury to public servant), 298 (making statements with deliberate intent to wound religious feelings) and 153 (provoking to cause riot) of the Pakistan Penal Code. According to the complaint, sent to the police on May 20, Akbar claimed that Chohan’s statements while speaking in a TV show about the former's religious beliefs had put his life at risk. “The offence has been committed to cause injury to the reputation, body, property and mind of the applicant and cause hatred in public at large towards the applicant,” the FIR read. Read more: PM's aide files case against Tareen group MPA “[Chohan committed] the offence with the nefarious design to wound the religious feelings of the applicant,” it added. The FIR further read that Chohan's “unfounded, false and vexatious” claims would provoke “religious hatred” and put Akbar’s life at risk. According to Express News, Chohan went to the In-charge Investigation of the police station and asked him for his arrest today. However, the police official said that he would only take any action in the case after getting permission from the Punjab Assembly speaker. Speaking to the media later, Chohan reiterated that he stood by his stance against Shahzad Akbar, adding that he wanted to state some fact to the nation as well as Prime Minister Imran Khan. "Shahzad Akbar is playing a leading role in the party and our friends should consider the hereafter and should not support him [Shahzad Akbar]," he added. The estranged PTI MPA further said that he will provide evidence supporting his claims about Shahzad Akbar but only after his arrest. He alleged that Akbar is promoting certain people in different institutions and on the agenda they are working. He urged PM Imran Khan to take notice of the issue. Meanwhile, PTI workers of PP-177 constituency staged a rally in solidarity with Chohan. They chanted slogans in favour of the PTI MPA. Special Assistant to PM on Political Communication Shahbaz Gill in a tweet on Sunday said, “It is not wise to stick to one's position on everything. If a mistake is made and someone is harmed unjustly, then one should be ashamed and apologise.” ?? ??? ?? ???? ???? ?? ??? ???? ??????? ???? ???????? ???? ?? ???????? ?? ?? ?? ????? ???????? ?? ?? ?? ??? ???? ?????? ???????? ?????? ??????????? ????? ?? ????? ???? ?? ???? ??? ????? ??? ??? ??? ???? ???? ?????? ?????? ??? ???? ???? ?? ?? ?? ?? ??? ???? ?? ???? ?? ????? ?????? — Dr. Shahbaz GiLL (@SHABAZGIL) May 30, 2021 “Nazir Chohan should not have spoken falsely and wrongly about Shahzad Akbar. Now, if a mistake has been made, it is better to apologise than to stick to it,” he advised Chohan. Information Minister Fawad Chaudhry also expressed his support for Akbar on Twitter. “Using religion card for personal vendetta is despicable. Lahore Police must take strict action against Chohan for using third rated tactics,” he tweeted. “Shahzad is doing his job [and] State cannot function if it fails to safeguard its officials against such attacks,” he added. Using religion card for personal vendetta is despicable Lahore Police must take strict action against Nazeer Chohan MPA for using third rated tactics against @ShazadAkbar Shahzad is doing his job State cannot function if it fails to safeguard his officials against such attacks — Ch Fawad Hussain (@fawadchaudhry) May 29, 2021 Akbar expressed his gratitude to Fawad for his support. “Hypocrisy and religious bigotry esp of [the] corrupt should have no space in public,” he wrote on Twitter. ????@fawadchaudhry for your support, the hypocrisy and religious bigotry esp of corrupt should have no space in public. Thanks to public support FIR has been registered https://t.co/vUSdt7PAU1 — Mirza Shahzad Akbar (@ShazadAkbar) May 29, 2021
Published Date: 30-May-2021
Share:  Linkedin   Whatsapp   Facebook