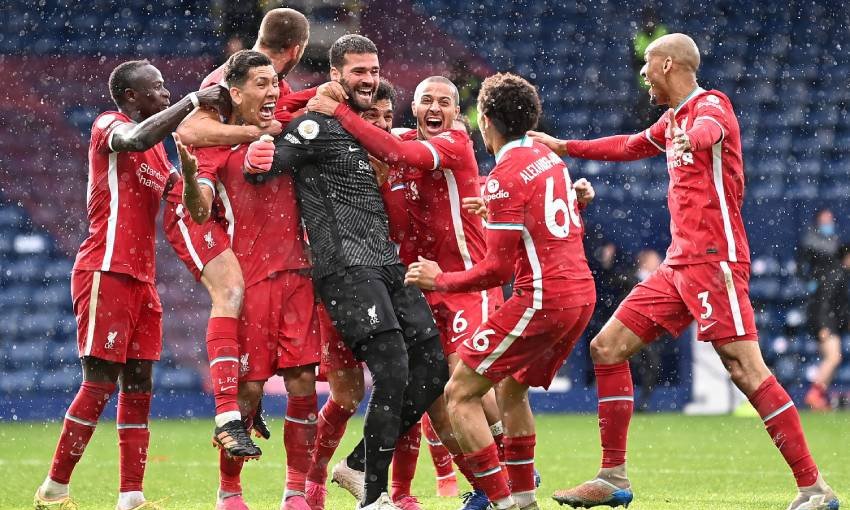 Description: Liverpool goalkeeper Alisson scored to secure a dramatic stoppage-time victory and keep his side's Premier League top-four hopes alive at West Bromwich Albion but Everton's European aspirations were left in tatters on Sunday. In the fifth minute of stoppage time with Liverpool and West Brom locked at 1-1, Alisson left his goal and ran forward to offer his assistance in the opposite penalty area. Trent Alexander-Arnold's delivery was perfect and the Brazilian keeper glanced a superb header into the net to spark wild celebrations from the visitors. It was the first time in Liverpool's history that a goalkeeper had scored a competitive goal and what a crucial one it could prove to be for Juergen Klopp's side. With two games remaining they are in fifth spot, one point behind Chelsea and three behind Leicester City and with those two playing each other in midweek, Liverpool know that two wins would see them in the top four to qualify for the Champions League - a prospect that looked unlikely two weeks ago. It was an emotional moment for Alisson who dedicated his unlikely goal to his father who drowned in February. "I just tried to run into a good place and be there to try and help my players, to bring a defender, but no one followed me and I am lucky and blessed, sometimes things you can't explain," Alisson said. "I'm too emotional, this last month for everything that has happened with me and my family, but football is my life, I played since I can remember with my father. I hope he was here to see it, I'm sure he is celebrating with God at his side." Liverpool's Mohamed Salah had cancelled out Hal Robson-Kanu's opener for West Brom. Everton's woeful home form struck again as they were downed 1-0 by bottom club Sheffield United - for whom 17-year-old Daniel Jebbison became the youngest player to score on his first Premier League start. They have now lost nine league games at home this season and have picked up only six points at Goodison Park in 2021. Defeat left them in eighth spot, three points behind West Ham United and Tottenham Hotspur. "We played so bad. The only result that could be possible is a defeat. As we usually did at home most of the time, we lost," Everton boss Carlo Ancelotti said. "I have to take responsibly for this but I hope the players do too." Tottenham beat Wolverhampton Wanderers 2-0 with Harry Kane scoring his 22nd Premier League goal of the season as his side moved above West Ham on goal difference. Pierre-Emile Hojbjerg scored Tottenham's second. In the day's other game Crystal Palace twice came from a goal behind to beat Aston Villa 3-2 - Tyrick Mitchell scoring the winner late on with his first career goal.
Published Date: 17-May-2021
Share:  Linkedin   Whatsapp   Facebook