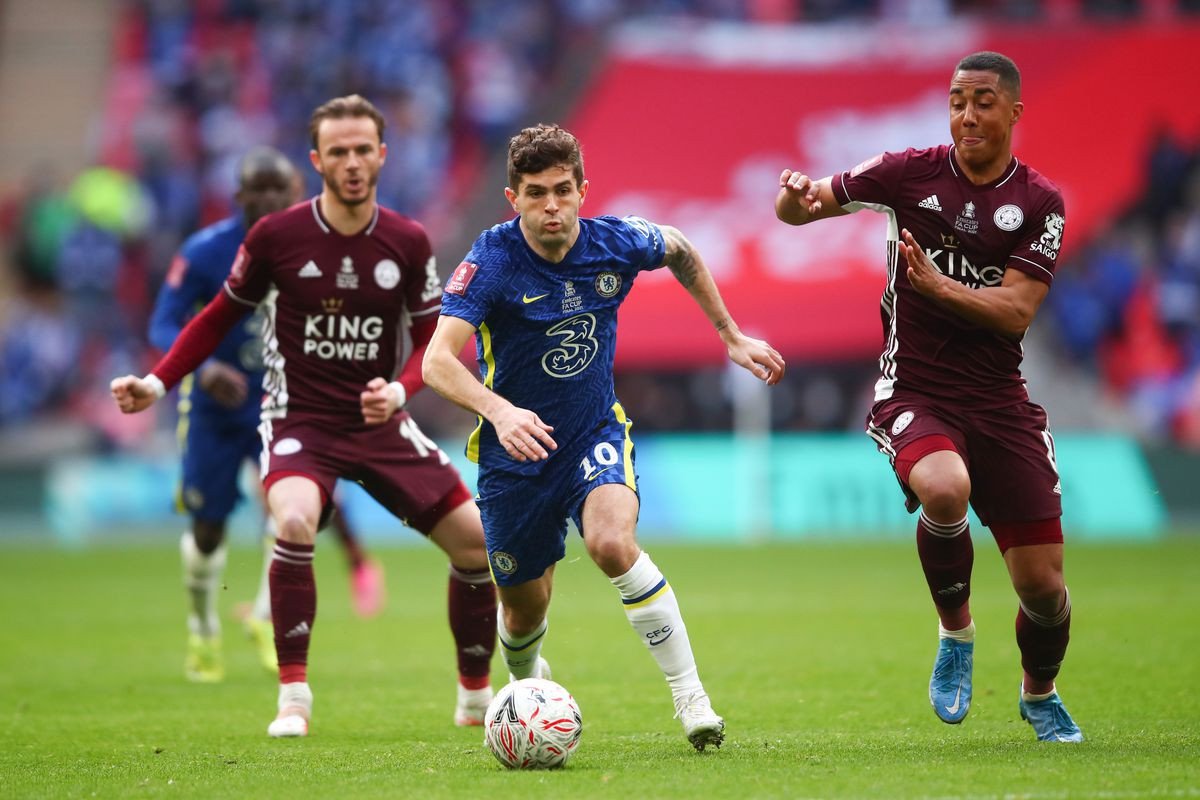 Description: Leicester have little time to bask in the glory of winning the FA Cup for the first time as they face Chelsea again on Tuesday in a Premier League clash of huge significance for who makes next season's Champions League. The Foxes are in pole position to join the already-qualified Manchester City and Manchester United in Europe's premier club competition as they sit third in the table with two games to go. However, Chelsea and Liverpool know victories in their final two games will likely be enough for both to move above Brendan Rodgers's men into the top four. Leicester lead the Blues by two points and are three clear of Liverpool, but face the toughest run-in with Tottenham to come on Sunday after their trip to Stamford Bridge. "We knew we didn't have any favours in the fixtures," said Rodgers on Monday. "Everything is still in our hands. The players have been absolutely brilliant up until this point. We've got European football, we've got two games now to arrive into the top four." Despite the disappointment of missing out on his first trophy in English football, Chelsea boss Thomas Tuchel did not shy away from suggestions that Tuesday's clash is more important than the cup final in the context his side's season. "When I stepped into this club the task was let's try everything to be in the top four, not let's try everything to win the FA Cup," said Tuchel. "Because the FA Cup, as big as it is, does not bring you to Champions League football next season. It's top four that brings us there. Tomorrow is another huge game." Chelsea's strength in depth could prove vital given the quick turnaround from Wembley's energy sapping clash in front of 22,000 fans. Tuchel's men were the dominant side on Saturday after he introduced Kai Havertz, Callum Hudson-Odoi, Ben Chilwell, Christian Pulisic and Olivier Giroud off the bench in the second-half and the German is likely to make a number of changes. Liverpool have on paper the easiest run in of the Champions League contenders as they visit Burnley on Wednesday and host Crystal Palace on Sunday. However, the Reds needed a stunning stoppage time winner from goalkeeper Alisson Becker to see off already-relegated West Brom on Sunday. "We still need six points to be in the Champions League and then we can maybe sit back with a bit of satisfaction," said Liverpool left-back Andy Robertson. Doors will be open to fans in the Premier League for the first time in 2021 for all 10 games over Tuesday and Wednesday. Up to 10,000 supporters can attend or a maximum of 25 percent capacity as coronavirus restrictions across England were eased from Monday. However, there may well be scenes of protest as well as celebration on their return. Three of the Premier League six involved in the failed European Super League project -- Manchester United, Tottenham and Chelsea -- are at home this midweek. The biggest protest is expected for United's clash with Fulham as supporters continue to vent their anger at the club's American owners, the Glazer family. Liverpool's visit to Old Trafford on May 2 was postponed after supporters stormed the pitch, while more protests took place ahead of that fixture when it did take place last week. "We've been waiting for a long, long time to welcome the fans back," said United boss Ole Gunnar Solskjaer. "It's never nice to see a club that is not united, fans with the team, so we're hoping that Tuesday is going to be a positive day that we move together."
Published Date: 18-May-2021
Share:  Linkedin   Whatsapp   Facebook