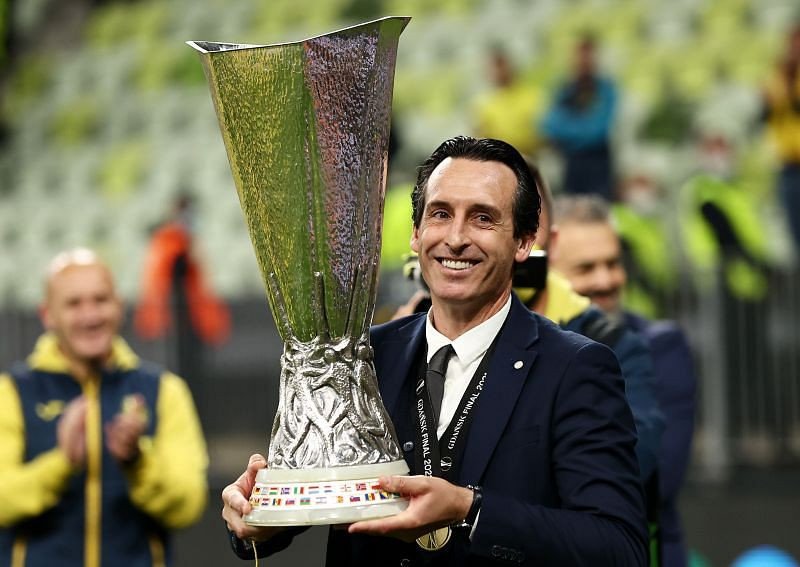 Description: Villarreal coach Unai Emery praised his "impeccable" players for their dedication after claiming the club's first major trophy by beating Manchester United in the Europa League final on Wednesday. The Spanish side won a thrilling penalty shoot-out 11-10, after a 1-1 draw, with goalkeeper Geronimo Rulli scoring his side's 11th before stepping back in goal to make the decisive save, stopping United counterpart David de Gea's spot-kick. It was a record fourth Europa League triumph for Emery as a manager, after winning the competition three times with Sevilla, but marked Villarreal's first piece of major silverware. "In the Europa League we have been absolutely impeccable. Since the very first moment. Some days we were coming at 6am to the stadium to prepare a game for the Sunday. All of this makes the journey (worthwhile)," Emery told a news conference. "We were talking about enjoying these moments. In the end you are proud to reach the title (decider) but if you don't win, you are sad. Winning is another step, an important step ahead. We do this profession for these moments. We have been able to give joy to many people." Emery joined Villarreal in July 2020, nine months after he was sacked by English side Arsenal following a poor run of results. The Spaniard knocked his former club out of this season's competition at the semi-final stage before taking down another Premier League giant in United, but insisted he did not see the achievement as a personal triumph. "I insist it is not a sports revenge at all. I try to enjoy every moment, winning and losing. I try to create new circumstances, so everywhere I have been, even in England at Arsenal, I have learned a lot, met many people, other cultures and football," he said. "At the end of that story was professional frustration, but some other doors opened then. Winning today is a satisfaction, but for my club today, as it was when I was at Sevilla. "When I was at Arsenal we played a Europa League final and could not win but it is a process, from that game I learned a lot to win this one maybe."
Published Date: 27-May-2021
Share:  Linkedin   Whatsapp   Facebook