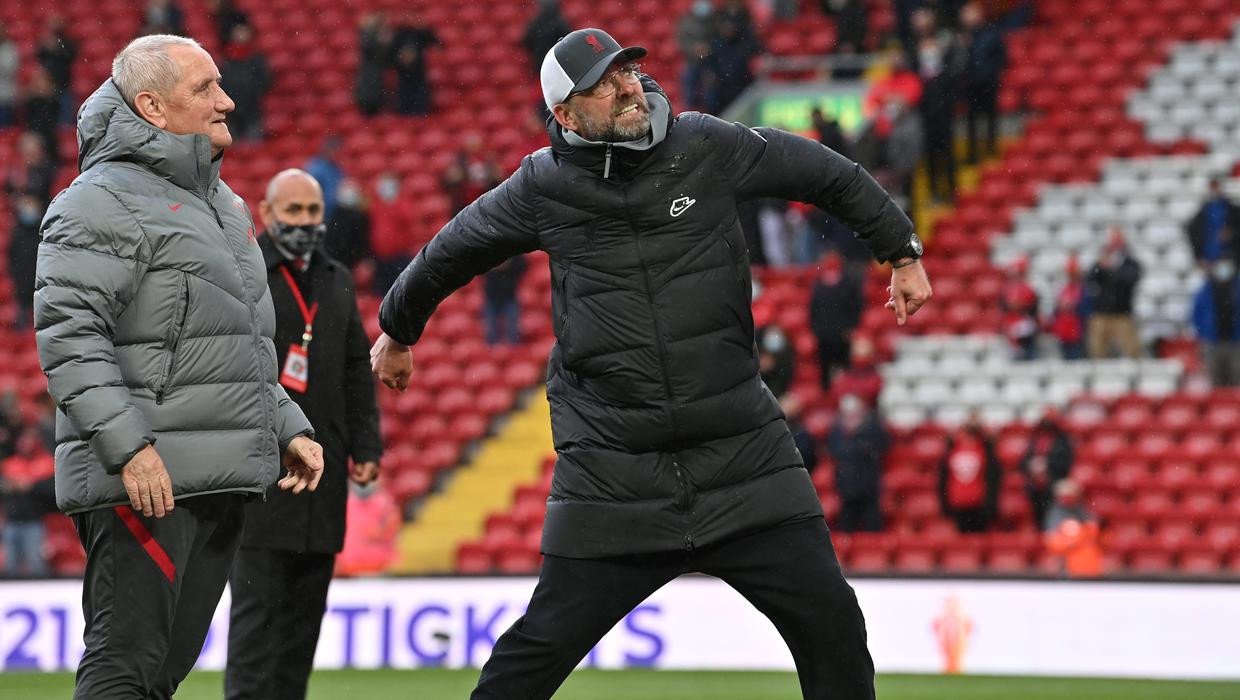 Description: Liverpool manager Jurgen Klopp hailed a third-place finish in the Premier League as a "massive achievement" after an injury-ravaged defence of their league title. In front of the largest attendance at Anfield for 14 months, Sadio Mane scored twice as the Reds beat Crystal Palace 2-0 on Sunday to secure the riches of Champions League football for a fifth straight season. After ending a 30-year wait to win the title last season, Liverpool looked set to miss out on the top four when six successive home defeats for the first time in the club's history left Klopp's men languishing in eighth in March. Long-term injuries deprived the German of many of his key players with talismanic centre-back Virgil van Dijk sidelined since October, while captain Jordan Henderson has missed the last three months of the campaign. "It's outstanding. This season from the outside you cannot understand," said Klopp. "We are Liverpool. You have to win, to become champions, whatever, but it is not always possible. "In the harder moments you can learn the most, show the most and we stuck together the whole time. "We were constantly sorting problems. It was so nice we could use the last six weeks to turn this season around." Fans were shut out when Liverpool ended their three decade wait to win the title and are still waiting for the chance of a much-delayed parade through the city to celebrate due to coronavirus restrictions. The lack of atmosphere has been blamed for the sudden drop off in Liverpool's home form. Prior to Burnley's win at Anfield in January, Liverpool had gone 68 home Premier League games without defeat. "To have the opportunity to have the last game in front of 10,000 people meant the world to us," added Klopp. "The 10,000 did a really good job today. When we came out it felt like it was sold out. Everything is better when people are in the stadium. We are better when there are people in the stadium because they support us. "They give us a boost, they help us. That we did it without them makes the achievement even bigger, but I don't want to try it a second time." Avoiding the financial hit of missing out on the Champions League on top of the economic consequences of the pandemic, should afford Klopp more money to reinforce his squad in the transfer market. And there is a big hole to fill as it was confirmed Georginio Wijnaldum will leave the club when his contract ends in July. Wijnaldum was handed a standing ovation when he was replaced late on. "It's very emotional for me because I'll lose a friend and that's how it is, but it is normal in football these kind of things happen," said Klopp. "Nobody can take our memories from us. If goodbye would not be tough then the time you had together was not worth it. It's really tough because we had a great time together." Wijnaldum was instrumental in Liverpool's Champions League and Premier League wins during his five seasons at the club. He famously scored twice in the Reds' 4-0 win over Barcelona to overturn a 3-0 first leg deficit in the 2019 Champions League semi-finals. The Dutch international has been strongly linked with a move to Barca, but hinted that he felt harshly treated by not being handed a new contract. "I'm fighting against tears right now," said Wijnaldum. "I didn't sign somewhere else. I will have to look at my story and how everything went. The fans deserve to know the story behind it."
Published Date: 24-May-2021
Share:  Linkedin   Whatsapp   Facebook