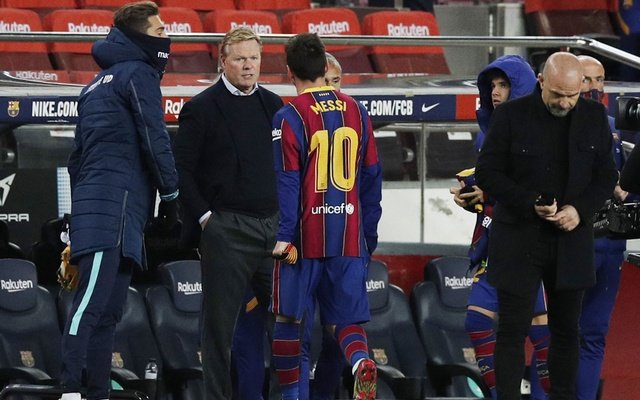 Description: Barcelona coach Ronald Koeman refused to answer questions on his future after his side slumped to a disappointing 2-1 loss at home to Celta Vigo, which means it can at best finish third in La Liga this season. Local media reported on Sunday that the club have opened negotiations with former midfielder Xavi Hernandez, who is currently in charge of Qatari side Al-Sadd, as pressure builds on the Dutchman after a disappointing first campaign in charge. "My future? That's not a question for me. I won't talk about it. I said what I think in my press conference (pre-game) and I won't repeat it," Koeman said after the Celta defeat. Koeman is not the only figure at Barca whose future is up in the air, with club great and record goalscorer Lionel Messi's contract up next month and no new agreement in place. After what could possibly have been his final game at the Camp Nou, the coach said the club were desperate for the Argentine to stay, suggesting they might not be able to repair the damage that would be done by losing a player of his calibre. I hope this is not Messi's last game at the Camp Nou. He's still the best player in the world and he showed us again today that playing without him is impossible," Koeman said. "He's scored 30 goals (in La Liga this season), he's given us so many points over so many years - we want him to stay but it's a question for him to answer. "But, if he's not at the club, who is going to score the goals for us?"
Published Date: 17-May-2021
Share:  Linkedin   Whatsapp   Facebook