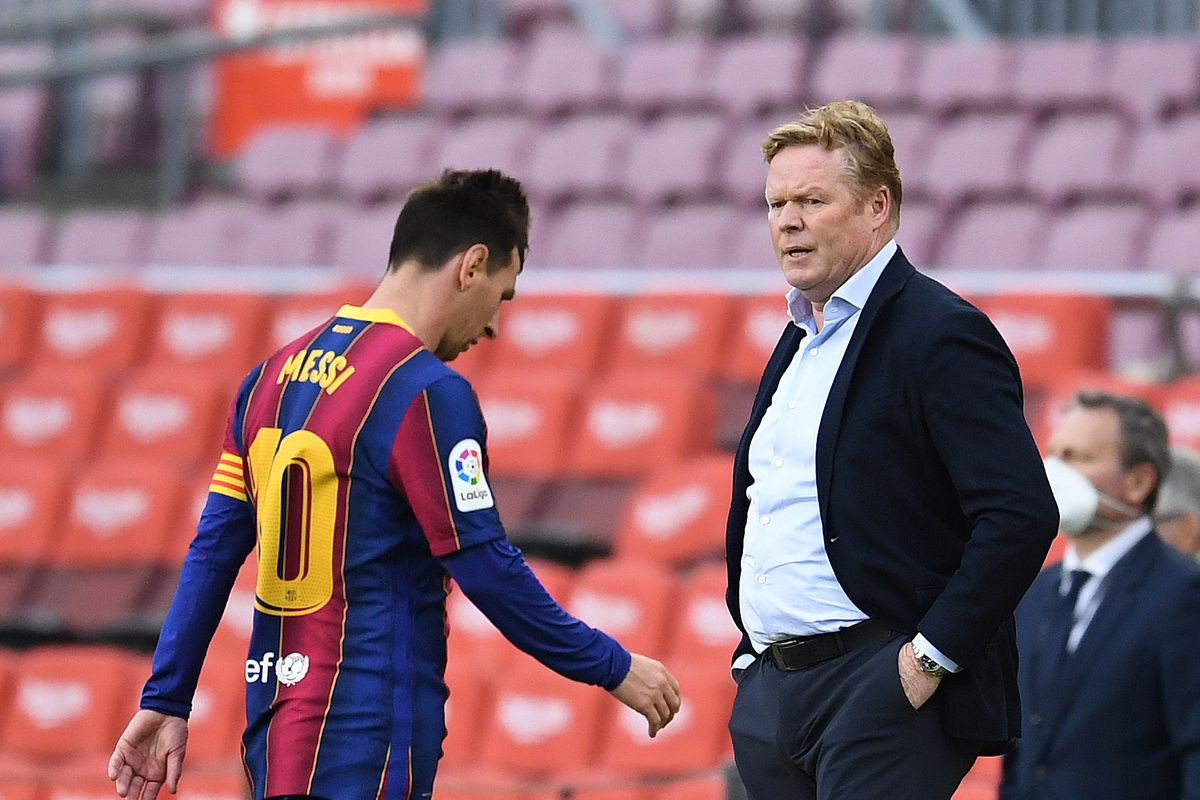 Description: "We chose him because he knows Barcelona," said the club's then-president Josep Maria Bartomeu and after nine months in the job, Ronald Koeman will know exactly how this works. Barca stabilised, improved, won the Copa del Rey and won round Lionel Messi - at least for the season and perhaps for good - but while Koeman did a lot, it will almost certainly not be enough. Joan Laporta, who succeeded Bartomeu as president in March, said on Tuesday a "cycle has finished" and although he may have been referring to another cull of expensive players, a new overhaul could mean a new coach too. Laporta said "a renewal process" is about to begin but that was Koeman's remit and in many ways he has done what was asked of him, overseeing a year of transition in which hope and respect were restored. Yet when Spain's biggest prize suddenly came into view, Barcelona bolted, one win in four games leaving them adrift in the title race before defeat at home to Celta Vigo on Sunday left Koeman clinging to his job. La Liga's most exciting tussle in years will be contested this weekend not between the established grandees but Real Madrid and Atletico Madrid, Barca watching on in third, their game against Eibar so irrelevant their goalkeeper Marc-Andre ter Stegen is using the week to have knee surgery. Koeman sees it more positively, the season ending where it began, without any real chance of serious silverware due to the change the club demanded and he has dutifully begun to carry out. "Barcelona are not about to win a lot of things right now," Koeman said in January. "We have to be realistic about where we've come from, the changes we've made." For a while, many subscribed to Koeman's theory of low expectations, a poor start even reinforcing them before the 4-1 thrashing by Paris Saint-Germain in the Champions League cemented Barcelona's new-found status as pretenders to the European elite. But the level required to win in Spain has been shown to be lower than in Europe and as the gap behind Atletico shrank through the spring, the stakes grew, a 14-match unbeaten run elevating Koeman while simultaneously increasing the distance he could fall. When Koeman arrived, he was "welcomed home" as a "blaugrana legend" but his purpose was not so much to love the club he was returning to but to rip it up and start again. He was tasked with bringing a powerful dressing room onside while jettisoning some of its most successful players. He was told to make Messi happy after selling Luis Suarez, Messi's striker partner, neighbour and best friend. He was urged to turn to youth, not gradually, in the comfort of an experienced, winning team, but all at once, the reliance on young talent a way of covering up the club's inability to afford proven stars. And in all those areas, Koeman largely succeeded, his pragmatism and honesty offering a refreshing change from the political squabbling that had engulfed Barcelona for so long. Laporta's election brought unity too and when the team found its rhythm, the new regime was confronted with the possibility Koeman could even continue. Messi had started slowly but found form and seemed to revel in his role of mentor to the youngsters. Frenkie de Jong looked better than ever and the excellent Pedri took his chance to shine. Oscar Mingueza, Sergino Dest, Ronald Araujo and Ilaix Moriba have all broken through under Koeman's watch. But as much as Koeman showed himself able to stabilise and mend, he also began to fall short in areas where an elite team normally demands excellence from a coach. In the biggest games, Barcelona repeatedly fell flat. They took one point from four matches against Atletico Madrid and Real Madrid and while a 1-1 draw away at PSG was seen as a sign of progress, they were outclassed in the first leg while the tie was still alive. During matches, Koeman's substitutions felt increasingly incoherent, and after matches, he became embittered, engaging more and more readily in petty squabbles over referees and VAR. Barca may have been the best attacking team in the league but the mental and defensive fragility that has underpinned their biggest failures in recent years remains unresolved. Instead, the players buckled under pressure and so did Koeman. When he was asked to fix things, he did it well but when the job became about winning, he lost control, to leave the club looking for change again.
Published Date: 20-May-2021
Share:  Linkedin   Whatsapp   Facebook