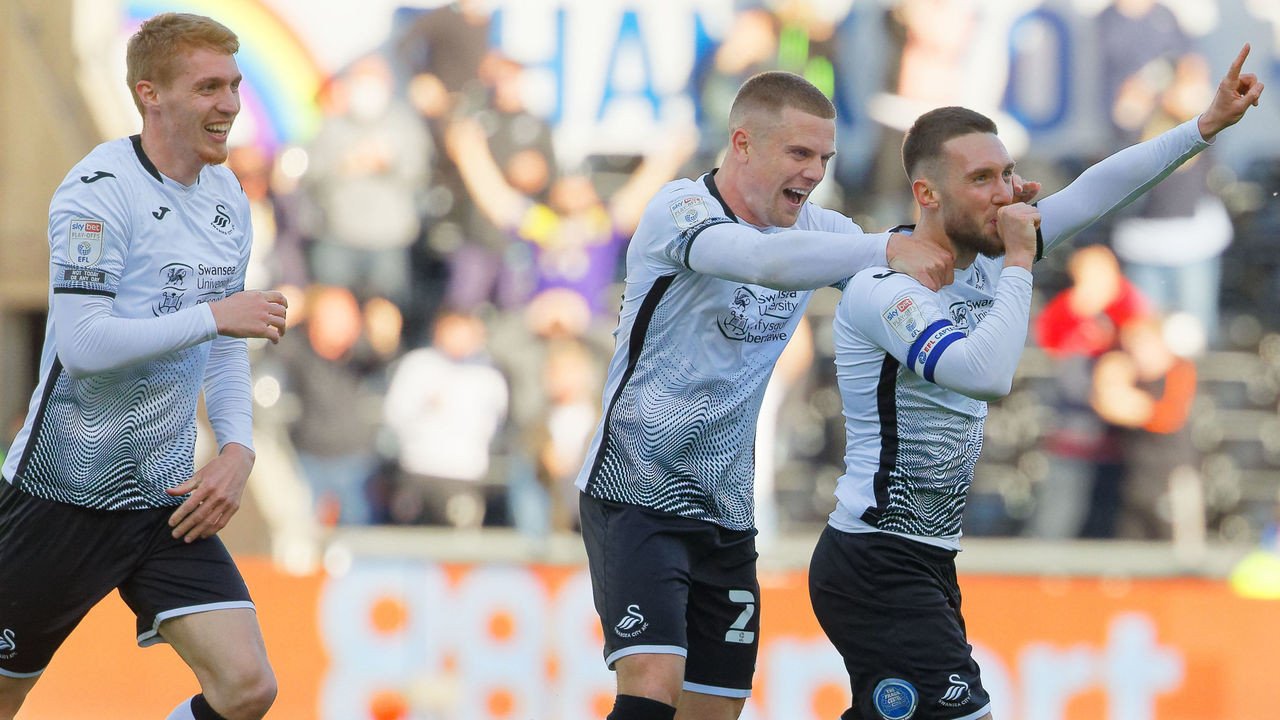 Description: Swansea and Brentford will meet for a £180 million ($254 million) place in the Premier League after winning their Championship play-off semi-finals on Saturday. Swansea clinched a 2-1 aggregate success against Barnsley thanks to a 1-1 draw at the Liberty Stadium in the second leg. Brentford staged a thrilling fightback to seal a 3-2 aggregate victory against Bournemouth, winning 3-1 in west London to overturn a 1-0 first leg deficit. The Bees were in danger of crashing out after Arnaut Danjuma put Bournemouth 2-0 up on aggregate early in the first half. But Brentford were given a controversial lifeline when Ivan Toney scored a penalty awarded for handball by Liam Kelly. Bournemouth defender Chris Mepham was sent off soon after that incident. To the delight of 4,500 fans at the Brentford Community Stadium, the Bees took full advantage through second half goals from Vitaly Janelt and Marcus Forss. "What a rollercoaster of emotions. Only sport, and especially football, can do that," Brentford boss Thomas Frank said. "I smashed my foot into the ice cooler after their goal. At 2-0 behind it was tough but I was not in doubt that we could still get there. "We have achieved something big and we know the ultimate is to win the final." Brentford, who haven't played in the top-flight for 74 years, will face Swansea in the final at Wembley on May 29. It will be Brentford's second successive Championship play-off final appearance after they lost to Fulham last season, having defeated Swansea in the semi-finals. Brentford are battling to avoid another play-off letdown after decades of failure in the end of season lottery. They have taken part in a record nine play-off campaigns without winning promotion. Bournemouth are consigned to a second season in the Championship after failing to win an immediate return to the Premier League following last season's relegation. Cherries boss Jonathan Woodgate said: "I'm absolutely devastated to be honest, the players are as well. "I can't for the life of me see how he's given a penalty. It hit his thigh then his hand. That changes the game." In south Wales, Swansea held onto the 1-0 first leg lead given to them by Andre Ayew. Looking to end their club's three-year absence from the Premier League, Steve Cooper's side doubled their aggregate lead after 39 minutes. Barnsley goalkeeper Brad Collins punched Conor Hourihane's free-kick to the edge of the area where Jay Fulton headed the ball into the path of Matt Grimes. Grimes unloaded a superb strike into the corner of the net from 18 yards. Barnsley drew level in the 71st minute when Jordan Williams pulled the ball back to the edge of the area and Cauley Woodrow swept home. "Matt Grimes has really taken the leadership role on, he's an excellent player and it was a fantastic goal," Cooper said. "I can't say I loved the game but I love the result. We know we have  players that can make a difference and that happened over the two legs. "Brentford will be a different game tactically, but we've proved we can play in both types of games. We will thrive on that." Barnsley manager Valerien Ismael added: "We are disappointed but we will keep our heads up and reflect. "We've got one of the lowest budgets in the league and such a young team and we've pushed Swansea until the final minute."
Published Date: 23-May-2021
Share:  Linkedin   Whatsapp   Facebook