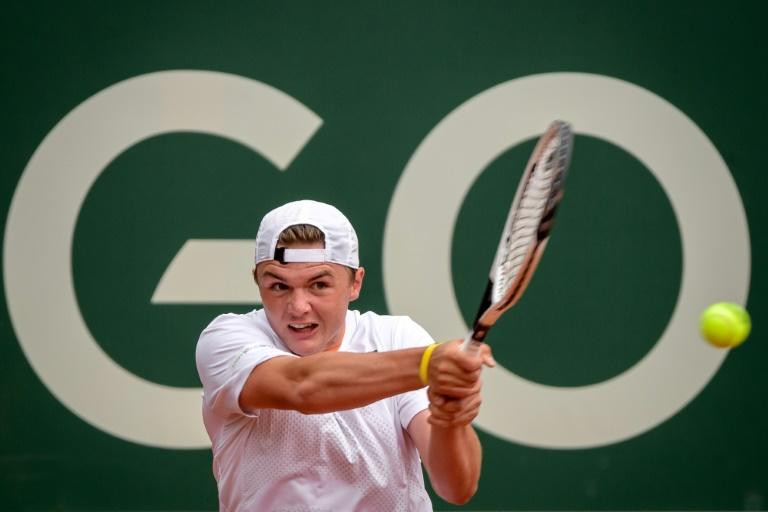 Description: Dominic Stricker gave Swiss tennis fans hope for the future on Wednesday when the world number 419 became the youngest player from his country to reach an ATP quarter-final since Roger Federer at Copenhagen in 2000. Stricker, 18, followed up his Geneva Open first round win over former US Open champion Marin Cilic with a 7-5, 6-4 victory over Hungary's Marton Fucsovics. His win came just a day after 20-time Grand Slam title winner Federer suffered a first round exit at the clay court event. Stricker's serve has been crucial this week with the teenager firing nine aces to Cilic's four and then helping save eight of the 11 break points he faced against Fucsovics. Stricker praised Federer for tips passed on when the pair practiced together in Dubai over the winter. "He told me some stuff, like how the serve is important and it's the only shot in tennis that you can do by yourself," former Roland Garros junior champion Stricker told atptour.com. "You can't learn it too much, so I just worked really hard on this shot. It's getting better and I'm winning many points on serve." Stricker next takes on Federer's conqueror Pablo Andujar for a place in the semi-finals. Meanwhile, Casper Ruud believes he has the weapons to reach the second week of Roland Garros and maybe help transform him into a "rock star" in his native Norway. Second seed Ruud beat Tennys Sandgren 7-5, 6-2 to set up a quarter-final with Germany's Dominik Koepfer. Ruud has been one of the impressive clay-court performers in recent months, making the semi-finals in Monte Carlo, Munich and Madrid. The 22-year-old said he was brimming with confidence, having hit a career-high ranking of 16th this month, and is targeting going far at the French Open, which starts on May 30. "I've shown myself that I'm up there at the high level of clay court players and I can compete well with pretty much any player on clay," Ruud told reporters. "I've been winning a lot of good matches against good opponents so it gives me a lot of confidence going into Roland Garros this year and I have to say I'm hoping to be in Paris for the second week of the tournament. That's my goal for this year." Ruud's best performances in the French capital are back-to-back runs to the third round in 2019 and 2020 where it took Federer and two-time runner-up Dominic Thiem to stop him. Ruud said he had worked on improving his returns -- something which was now paying dividends in terms of his self-assurance. "This has maybe come even more, the last couple of months: the confidence and self-belief that this position is maybe where I belong and hope to compete and play for many years into the future," he said. "That self-confidence of me belonging in this group of new young guys is something that I've gained more and more at least, especially the last couple of months with back-to-back semi finals." But he added: "I'm not a rock star in Norway yet."
Published Date: 20-May-2021
Share:  Linkedin   Whatsapp   Facebook