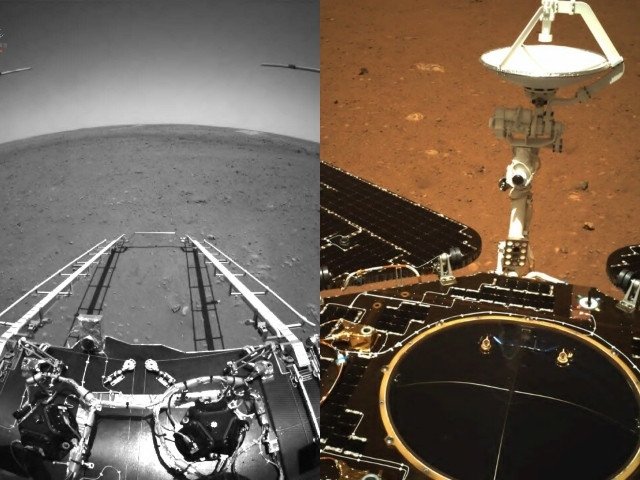 Description: Solar panels against an alien landscape, ramps, and rods pointing at the Martian horizon - China's first probe on the Red Planet has beamed back its first "selfies" after its history-making landing last week. The Zhurong rover was carried into the Martian atmosphere in a lander on Saturday, in the first-ever successful probe landing by any country on its first Mars mission. Zhurong, named after a mythical Chinese fire god, arrived a few months behind the United States' latest probe to Mars - Perseverance - and has been celebrated in China as a milestone in its ascent to space superpower status. SpaceX rocketship launches astronauts on NASA mission to space station The China National Space Administration on Wednesday published the images taken by cameras attached to the rover, which showed the obstacle-avoidance equipment and solar panels on the vehicle, as well as the texture of the Martian surface.  "People of the internet, the Mars images you've been longing for are here," the space agency said in a social media post containing the images. The rover's landing was a nail-biter for Chinese space engineers, with state media describing the process of using a parachute to slow descent and buffer legs as "the most challenging part of the mission". NASA completes major test on rocket that could take humans back to the moon It is expected to spend around three months there taking photos and harvesting geographical data. China has come a long way in its race to catch up with the United States and Russia, whose astronauts and cosmonauts have decades of experience in space exploration. It successfully launched the first module of its new space station last month with hopes of having it crewed by 2022 and eventually sending humans to the Moon.
Published Date: 20-May-2021
Share:  Linkedin   Whatsapp   Facebook