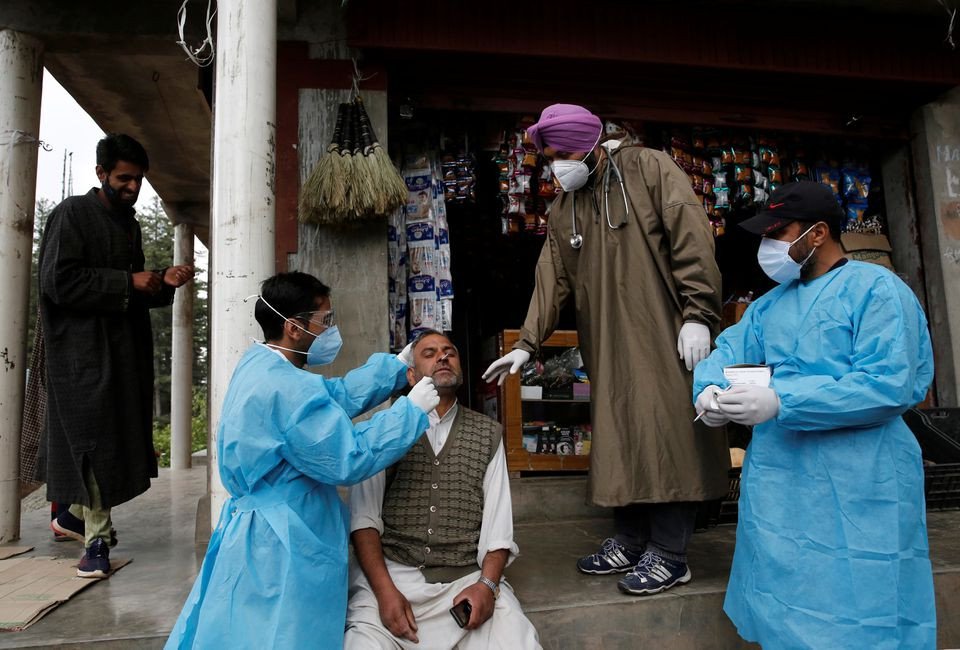 Description: India said on Friday it was working to alleviate a shortage of a medicine used to treat a rare fungal disease hitting Covid-19 patients as its healthcare system reels under a massive wave of coronavirus infections. Cases of mucormycosis, or "black fungus," a potentially serious condition that causes blurred or double vision, chest pain and breathing difficulties, have surged in India, mostly among Covid-19 patients. At least 7,250 such cases have been found across the country as of May 19, local media reported. "In this battle of ours, another new challenge of black fungus has also emerged these days," Prime Minister Narendra Modi tweeted on Friday. India has the second-highest tally of confirmed Covid-19 cases in the world and has been reporting some 250,000 infections and 4,000 deaths daily. With mucormycosis cases rising, India's health ministry said it was looking for more companies to produce the antifungal drug amphotericin B used to treat it and also increase imports of the medication. That would lead to a nearly 250% increase in supply to around 570,000 vials in June, the ministry said on Friday. Some Indian states like Maharashtra, home to the financial capital Mumbai, said they were running low on amphotericin B as black fungus cases spiked and had asked federal authorities to provide more. "One patient needs 60 to 100 injections (of amphotericin B) depending on severity of illness. With current case load, we need more than 150,000 injections," Maharashtra health minister Rajesh Tope told reporters. The western state has reported 1,500 cases of mucormycosis so far, and 850 patients are undergoing treatment. The state governments in the two southern states of Kerala and Karnataka have extended lockdowns to try to keep the Covid-19 related infection from spreading further. The lockdown in Kerala is likely to last until the end of this month, while it has been extended to June 7 in Karnataka. After several other states, New Delhi will also halt vaccinations for people in the age group of 18-44 years due to supply shortage, the state government said in a statement on Friday evening. RURAL TESTING Overall, India's Covid-19 infection tally stands at more than 26 million, with a death toll of 291,331, health ministry data showed on Friday. The country conducted roughly two million tests on Thursday, but experts have said infections and deaths could be between five-to-10 times higher than official estimates as the virus spreads to the vast hinterland. India aims to double its testing capacity to 4.5 million per day by the end of June, of which 60% would be through rapid antigen tests, according to the government. As part of the effort, the state-run Indian Council of Medical Research (ICMR) this week approved home testing for COVID-19, using rapid antigen tests. These tests, less accurate than the RT-PCR method, are advised only for symptomatic cases and immediate contacts of laboratory-confirmed positive cases, according to the state-run ICMR. “In rural areas or in field level areas, rapid antigen test is the backbone of testing and that should be encouraged,” Balram Bhargava, head of ICMR, told reporters.
Published Date: 22-May-2021
Share:  Linkedin   Whatsapp   Facebook