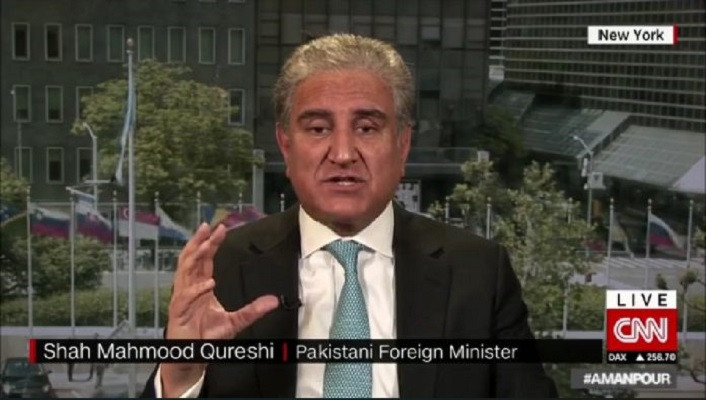 Description: Foreign Minister Shah Mahmood Qureshi has said that Israel was "losing out" and the "tide was turning" amid mounting pressure of public opinion. The foreign minister’s remarks came during an interview with CNN in New York on Thursday where he also addressed the United Nations General Assembly's (UNGA) emergency session on Palestine. “I am convinced, the tide is turning. I am convinced the public pressure, the pressure of public opinion is mounting and the ceasefire is inevitable. Israel is losing out. They are losing the media war despite their connections,” the foreign minister said hours before Hamas and Israel declared a truce, ending 11 days of Israeli aggression against Gaza.  FM Qureshi stressed that videos shared by the citizen journalist showing Israeli violence had jolted the world prompting the people in London, Madrid, Michigan, Sydney, Chicago and capitals of European nations to demand an immediate end to that “insanity”. “They are calling for an immediate ceasefire,” he said. The foreign minister further added that the UN Security Council had failed to issue a consensus statement on the issue whereas the UN General Assembly gave a clear message to it that it was their prime responsibility to ensure peace and security. “Extremist elements would take advantage of the situation when there was no engagement or negotiation, and genocide, ethnic cleansing and war crimes are taking place,” Qureshi added. Qureshi further said that the situation could only be avoided by pursuing the two-state solution and by adhering to the UNSC resolutions in which negotiations for the ceasefire are the first step. “This insanity must come to an end. We must promote dialogue. We must sit and talk and we must promote peace,” he stressed adding that both Palestinians and Israelis had the right to live and to protect their children. Read more: Truce ends 11 days of Israeli bombardment of Gaza Providing statistics on the loss of life and infrastructure during the 11-day conflict between Palestine and Israel, FM Qureshi said that about 230 innocent Palestinians had been killed; more than 50,000 had been displaced; 50 schools had been bombed, and hospitals, Red Cross and media offices had been targeted. On a question about human rights violation of Uighur Muslims, FM Qureshi said that “the federal government had always spoken with China – a very good friend of Pakistan – and both the countries used their diplomatic channels as they did not discuss everything in public”. Pakistan had always been advocating for human rights, be it was Gaza or the Indian Illegally Occupied Jammu and Kashmir, Qureshi maintained. “Look at the atrocities that have been committed in Kashmir. Does the world talk about it? How many people have talked about it? Let’s be fair. Let’s have a fair assessment or how much coverage have that got,” he said. Talking about the Covid-19 situation in the country, the FM said that Pakistan had managed the first and second waves “reasonably well” under the leadership of Prime Minister Imran Khan. “We are in the midst of a third wave and Pakistan was doing its best to bring the positivity ratio down but the country needed vaccines, though China gifted it to the country and has also bought it,” he said. However, he added, the vaccine committed to Pakistan through COVAX have not arrived in time. The process of inoculation is ongoing but the country needs assistance. At the beginning of the interview, FM Qureshi said that Israel was also losing the media war despite having "deep pockets" and being able to “ influence” and “control the media”. When accused of anti-semitism by the host over his remarks Qureshi said, “I have never been anti-semitic and I never will be.”
Published Date: 21-May-2021
Share:  Linkedin   Whatsapp   Facebook