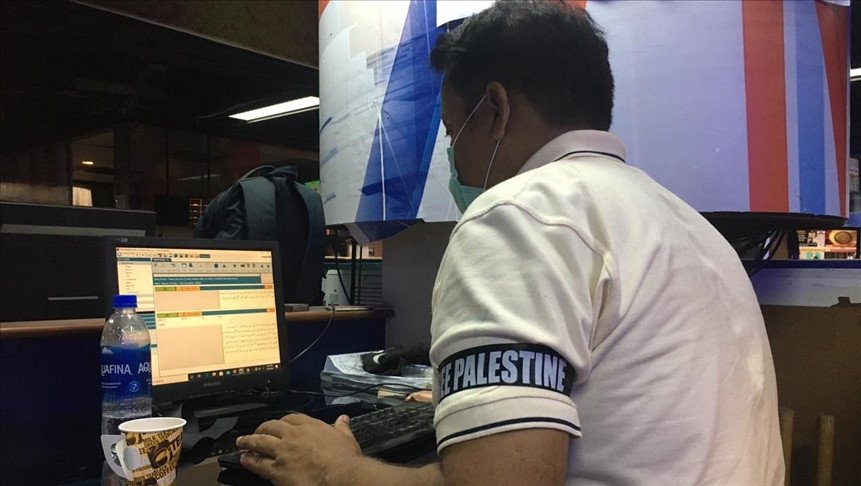 Description: Journalists in Pakistan on Tuesday observed a day of mourning against Israel's bombing of a media center in Gaza during its 11-day assault on the blockaded coastal enclave. The day was observed on the call of the Pakistan Federal Union of Journalists, a nationwide body of media workers, the Karachi Press Club and the Karachi Union of Journalists (KUJ). Journalists wore black armbands stating "Free Palestine", while performing their duties. The Palestinian flag was also hoisted on the Karachi Press Club building, a historic landmark in the coastal city which is a hotspot for protests, to express solidarity with Palestinian and foreign journalists who were injured, tortured and harassed by the Israeli forces. "We are observing the day to condemn the Israeli attacks on free media, which actually exposed the targeting of civilians, especially children by the Zionist forces," Rizwan Bhatti, the general secretary of the Karachi Press Club told Anadolu Agency. Atiq-ur-Rehman, a sports journalist, said: "Pakistan's journalist community stands with our Palestinian colleagues, and the media offices, which were bombed by Israeli forces, defying all International rules and norms about the freedom of press." According to the New York-based Committee to Protect Journalists, eight journalists were assaulted by Israeli forces in occupied East Jerusalem between May 7 and 10. Turkish state broadcaster TRT Arabic’s Gaza office was targeted by Israeli airstrikes on May 13 when the reporter was on air, injuring several people. Meanwhile, Turgut Alp Boyraz, Anadolu Agency's Middle East news editor, was shot twice by Israeli police in two separate incidents while covering recent events in Palestine. Boyraz, a veteran journalist with eight years of experience with the agency, was shot in the foot with a plastic bullet on May 7 while covering a raid on Al-Aqsa Mosque's Haram al-Sharif in the occupied East Jerusalem. On May 10, he was shot in the leg with two rubber bullets in another Israeli police raid on the Al-Aqsa Mosque. The confrontation spread to the Gaza Strip, with Israel launching airstrikes that killed at least 253 Palestinians, including 66 children and 39 women, and injured more than 1,900 others. Health authorities in the West Bank also confirmed 31 killed in the occupied region, totaling 284 across all Palestinian territories. Thirteen Israelis were also killed in Palestinian rocket fire from the Gaza Strip.
Published Date: 25-May-2021
Share:  Linkedin   Whatsapp   Facebook