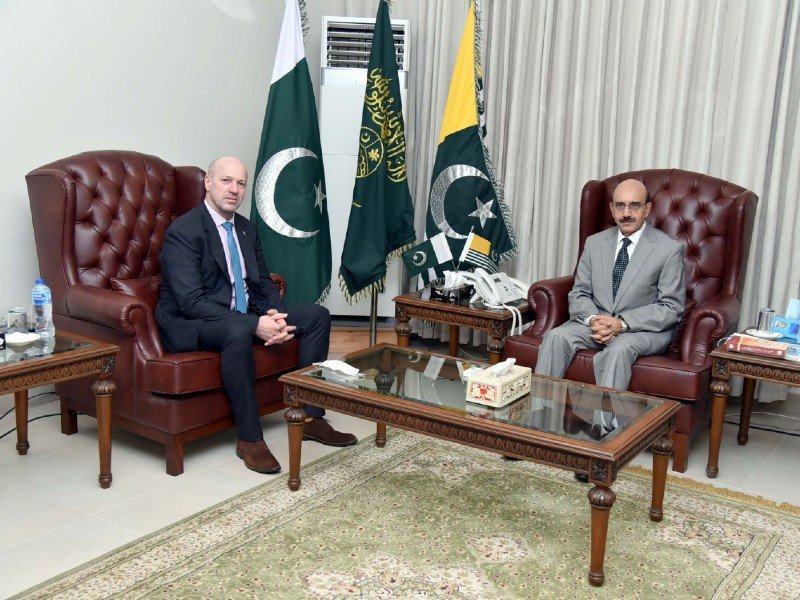 Description: Ambassador of Bosnia and Herzegovina Sakib Foric has called on Azad Jammu and Kashmir (AJK) President Sardar Masood Khan at the Aiwan-e-Sadr in Muzaffarabad on Monday. During the meeting, the two discussed ways to strengthen relations between the people of Bosnia, Pakistan and AJK. The ambassador thanked AJK president and conveyed his desire to strengthen bilateral relations between Pakistan and Bosnia by promoting cooperation in multiple areas, including defence – particularly training of Bosnia’s armed personnel in military institutions of Pakistan. May 24; Muzaffarabad: Receiving a portrait of a Bosnian city from Mr. Sakib Foric, Ambassador of Bosnia to Pakistan. pic.twitter.com/6MUCJkjMNZ — Masood Khan (@Masood__Khan) May 24, 2021 He also acknowledged Pakistan’s endeavours for promoting unity among the Muslims and also thanked for extending assistance to Bosnia in a number of sectors and widely recognising its position and sovereignty at the international level. Read more: AJK president demands release of Kashmiris from Indian jails amid Covid crisis Masood expressed his immense pleasure to receive the Bosnian envoy, saying Bosnia is a great nation with a history of the valiant struggle to fight tyranny, ethnic cleansing and genocide. “You have been a beacon of light for other nations in the heart of Europe,” he added. Terming Sakib Foric as one of the most dynamic ambassadors in the diplomatic community in Pakistan, Masood said Sakib’s tenure in Pakistan remained very productive in furthering the friendly relations between Bosnia, Pakistan, and Azad Kashmir. “During your tenure, the Bosnian President Sefik Dzaferovic visited Pakistan and I had the honour of meeting him and discussing the dire situation in Indian Illegally Occupied Jammu and Kashmir,” the AJK president said, adding that he had also discussed with him the promotion of closer ties and exchanges between Bosnia and Azad Kashmir. May 24; Muzaffarabad: A group photo with Mr. Sakib Foric, Ambassador of Bosnia to Pakistan and his spouse. pic.twitter.com/0VtD7qOUus — Masood Khan (@Masood__Khan) May 24, 2021 The Bosnian ambassador said that his country is fully aware of the plight of Kashmiris and sought full respect for their fundamental rights. Masood thanked the envoy for the solidarity shown by the Bosnian People towards the people of Jammu and Kashmir. Foric said that President Sefik Dzaferovic had especially asked him to convey his greetings and good wishes to the AJK president. Masood reciprocated with warmth and gratitude. Also read: India not democratic but fascist state: AJK president Sharing his memories of the Balkan Wars of the 1990s, the AJK president said that he had the honour of drafting and steering resolutions on Bosnia in the Third Committee and the General Assembly of the United Nations. He said that Pakistan, as a member of the United Nations Security Council, had made resolute efforts to stop ethnic cleansing and genocide in Bosnia and Herzegovina. The AJK president said that deep scars left by the crimes against the Bosnian people and the massacre of innocent Muslims in Srebrenica are still fresh in our hearts. Pakistan, he said, had sent its peacekeeping forces to the area to help the people of Bosnia. "We had supported Bosnians not merely because they were Muslims but because it was a matter of humanity." The president suggested the exchange of students, academics, and journalists between AJK and Bosnia as part of people-to-people contacts to strengthen relations between the people of the two regions. May 24; Muzaffarabad: Presenting gift to Mr. Sakib Foric, Ambassador of Bosnia to Pakistan. pic.twitter.com/EuDPZD6Te2 — Masood Khan (@Masood__Khan) May 24, 2021 He also expressed his gratitude to Bosnia for providing generous help to build a girls school at Chattar Kalass near Muzaffarabad and constructing a hospital there after the earthquake in 2005. The Bosnian ambassador arrived in Muzaffarabad to deliver computers to the children of the school build at Chattar Kallas through Bosnian funding. The computers provided by the embassy of Bosnia were delivered to the management of the school at a simple ceremony held at the presidency. Earlier, the AJK president thanked the envoy for his gesture in the midst of the Covid-19 pandemic.
Published Date: 24-May-2021
Share:  Linkedin   Whatsapp   Facebook