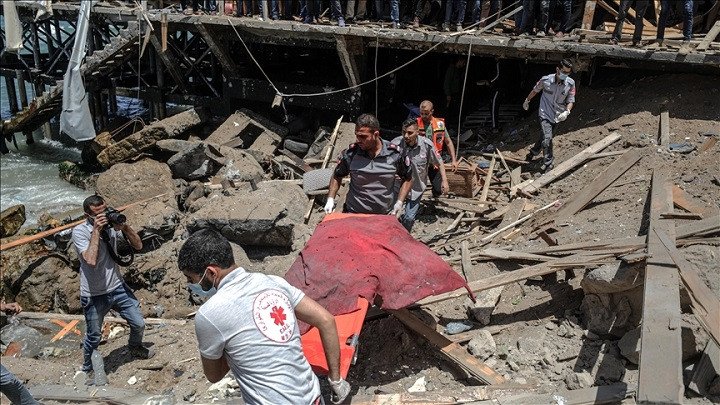 Description: The federal cabinet on Tuesday approved sending relief items to Palestine needed to deal with the Covid-19 outbreak amid the Israeli aggression that the people there were facing for more than a week. In a post-cabinet briefing, Information Minister Fawad Chaudhry told reporters that the foundation of the country's policy on Palestine was laid down by the Quaid-e-Azam. “Pakistan is the first Muslim country that adopted a very clear and strong stance on Palestine and it is still standing by it even today,” he added. Fawad maintained that Pakistan's efforts for Palestine were being appreciated by all Muslim countries and their leadership, including Palestinian President Mahmud Abbas. “The Palestinian ambassador [to Pakistan] has also expressed his gratitude to us for our support,” he added. The minister further said Turkish President Recep Tayyip Erdogan had also acknowledged Prime Minister Imran Khan's role in the matter. Separately, Foreign Minister Shah Mahmood Qureshi met his Turkish counterpart Mevlut Cavusoglu in Ankara. The two leaders vowed to unitedly raise the issue of Palestine at the United Nations General Assembly. They condemned the Israeli aggression against the Palestinians and their forced eviction. The Turkish foreign minister lauded Qureshi's address at the foreign ministerial level emergency meeting of the Organisation of Islamic Cooperation on Sunday where the latter had reiterated Pakistan's continued and fullest support for the people of Palestine. Qureshi also appreciated the firm and categorical stance of the Turkish president and his government on the issue of Palestine. He said the whole Muslim world was hurt due to the Israeli attacks and the violence in Gaza during the holy month of Ramazan and Eidul Fitr. The foreign minister told his Turkish counterpart that on PM Imran's directives, Pakistan was observing "Kashmir Solidarity Day" on May 21. Qureshi, who arrived in the Turkish capital on PM Imran's directions on a diplomatic mission to support Palestine, resolved that Islamabad would never leave the Palestinian people alone. From Turkey, the foreign minister will leave for New York along with his Turkish, Sudanese and Palestinian counterparts. Read Pakistan, Turkey discuss ways to end Israeli atrocities In New York, he will speak at the UNGA session, meet various dignitaries and hold talks with local and international media representatives and present Pakistan's views on the situation in Palestine. Speaking at the news conference, Fawad said the cabinet had also discussed electoral reforms. Prime Minister's Adviser on Parliamentary Affairs Dr Babar Awan and Science and Technology Minister Shibli Faraz informed the participants of the meeting about progress made on e-voting machines and granting the right to vote to overseas Pakistanis. The prime minister noted that all political parties complained about poll rigging after every election but none of them considered coming up with a solution to the problem. The cabinet was informed that significant progress had been witnessed in the telecom sector. Last year, the number of cellphone users stood at 167 million, whereas it was recorded at 184 million on April 30, 2021. Similarly, the number of broadband users had jacked up from 77 million to 100 million. The participants of the meeting also discussed the disbursement of housing loans to the low-income groups and financial assistance for farmers The premier noted that there had been a marked improvement in the agricultural sector. He noted that a 55% increase was witnessed in the sales of tractors. An additional sum of Rs1.10 trillion was being spent on the development of the agricultural sector. Farmers are being provided with ‘Kisan Cards' so that they could directly benefit from the government’s subsidy for them. On the disbursement of low-cost housing loans, the cabinet was informed that 11,000 people had benefited from the Rs5 billion deposited with the Akhuwat Foundation. The premier said the government had three targets to achieve: poverty alleviation, bridge the gap between the rich and poor, and improve human development figures. The cabinet also sent recommendations to ease the rules for the Kartarpur corridor to the board of the Public Procurement Regulatory Authority. The huddle gave the nod to the movement of a UN container from Karachi under the Kabul trans-shipment route. It also gave the approval to the issuance of a Rs70 coin to commemorate the 70 years of Pakistan-China ties. The People’s Bank of China is also issuing two coins to mark the occasion, one made of gold and the other silver. The cabinet gave its approval to the decisions made by the Economic Coordination Committee (ECC) in its May 5 meeting including duty exemption on the import of oxygen for Covid-19 patients. (With input from APP)
Published Date: 19-May-2021
Share:  Linkedin   Whatsapp   Facebook