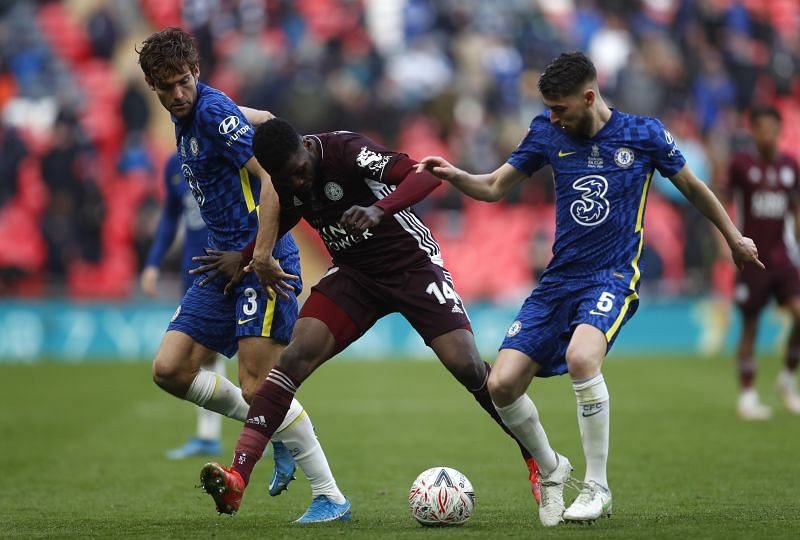 Description: Liverpool, Chelsea and Leicester will stage a thrilling battle to finish in the Premier League's top four as the English top-flight season comes to a dramatic conclusion on Sunday. Heading into the final round of fixtures, just one point separates third placed Chelsea, fourth placed Liverpool and Leicester in fifth. With the top four guaranteed a lucrative berth in next season's Champions League, the stakes could not be any higher. Champions Manchester City and second placed Manchester United are already certain to finish in the top four, leaving two places on offer. Chelsea, one point above Liverpool and Leicester, will clinch third place if they win at Aston Villa. Deposed champions Liverpool can salvage a difficult, injury-plagued season by nailing down fourth place when they host Crystal Palace. To do that, Jurgen Klopp's team, ahead of Leicester on goal difference, must match the FA Cup winners' result against Tottenham at the King Power Stadium. Liverpool have a goal difference of +24 and Leicester are on +20, meaning a Reds victory against Palace should be enough barring a remarkable goal spree from Brendan Rodgers' team. Having won seven of their last nine games, Liverpool are expected to finish the job and Klopp insists the pressure of the tense finale won't be a problem. "I can't remember a season when it didn't go to the wire because it was pretty much a final or we had to fight to the last match day for qualification for the Champions League," Klopp said. "Even at Dortmund it was like this, at Mainz it was to stay in the league or when we got promoted. "I am really used to stress until the last match day." Around 10,000 Liverpool fans will be inside Anfield after a season played almost entirely behind closed doors because of the coronavirus. Those supporters have missed a rollercoaster campaign that saw Liverpool fall eight points adrift of fourth place in mid-March before a run of 23 points from the past 27 hauled them back into contention. "What did we do We found stability, created confidence again or got it back, scored goals in the right moments and conceded less, that helped as well," Klopp said. Chelsea seized control of their top four destiny with a crucial 2-1 win against Leicester on Tuesday. Thomas Tuchel's team could also qualify for the Champions League if they beat Manchester City in the final of this season's tournament on May 29. Tuchel, who has revived Chelsea since replacing the sacked Frank Lampard in January, has no fear of the inevitable criticism if the Blues fall out of the top four. "Honestly, it was the maximum target to reach the top four this season," Tuchel said. "But I know what you're speaking of, and I will not hide. You don't have to be a genius, I know what can happen if we lose. "Of course you can lose any match in football but listen, there's a big difference between fear and danger." Leicester potentially face heartbreak for a second successive season after missing out last year due to a final-day defeat by Manchester United. Although they won the FA Cup for the first time with their final triumph against Chelsea on May 15, Leicester's defeat at Stamford Bridge three days later may prove decisive. Knowing they might need to win by a big margin against Tottenham, Rodgers said: "We'll talk about the different situations that may arise in the game. "The key is to win the game, and get three points. There are very few games where you are going to get five or six goals in the Premier League, so win the game." West Ham need a point at home to Southampton on Sunday to secure sixth place and a Europa League spot. Tottenham can still pip them on goal difference should they beat Leicester and the Hammers lose. Fixtures (all 1500GMT) Arsenal v Brighton, Aston Villa v Chelsea, Fulham v Newcastle, Leeds v West Brom, Leicester v Tottenham, Liverpool v Crystal Palace, Man City v Everton, Sheffield United v Burnley, West Ham v Southampton, Wolves v Man Utd.
Published Date: 23-May-2021
Share:  Linkedin   Whatsapp   Facebook