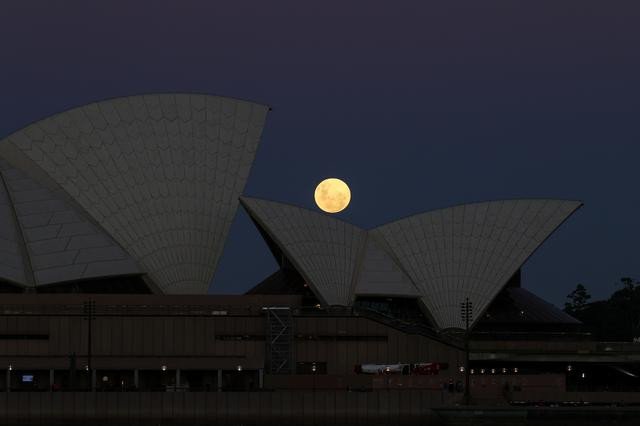 Description: The year’s biggest full moon, known as the Super Flower Moon, rose in a clear evening sky over the Sydney Opera House on Wednesday to the delight of amateur photographers positioned just across the water to capture the moment. The moon was at the closest point to Earth in its orbit, making it appear about 7% larger and 15% brighter than normal. The May full moon is known as the Flower Moon as it occurs when spring flowers are in bloom. China's rover sends back its first 'selfies' from Mars This Super Flower Moon will also feature the first total lunar eclipse in more than two years, during which the moon will pass through the Earth's shadow. It will appear red, which is known as a blood moon, because the light is scattered through the Earth's atmosphere, much like during sunset. The eclipse will be seen in Sydney when the moon is much higher in the sky. SpaceX rocketship launches astronauts on NASA mission to space station The eclipse was due to take place in the early morning hours in western North America, with people in Alaska and Hawaii poised to get the best views. It will also be visible in southern Chile and Argentina. Stargazers in all of Australia and in New Zealand and parts of Southeast Asia will be able to see the eclipse on Wednesday evening.
Published Date: 27-May-2021
Share:  Linkedin   Whatsapp   Facebook